Bollywood has churned out multiple biographies in the past. From Asha Parekh The Hit Girl to Shatrughan Sinha Anything But Khamosh, stories centering on the lives of renowned personalities have been popular amongst readers/viewers for a long time. Now, the Nawab of Pataudi Saif Ali Khan is all set to do a tell-all memoir (not an autobiography). As we wait with bated breath for the release of the Jawaani Jaaneman actor’s memoir, lets take a look at five Bollywood biographies that told the truth and won hearts world over. Lively, chirpy, ebullient and seemingly forthright, this was Rishi as he was. Candid about his father Raj Kapoor’s affairs, one didn’t see Rishi saying anything about his own indiscretions before or after his very successful marriage to Neetu Singh. We believe you. Nonetheless a biography/memoir, co-written by journalist Meena Iyer that did some plain speak, albeit selectively. And I wish the title was a little classier than a hit song from Rishi’s film. Thankfully, this biography was not named Kati Patang or Sayanora Sayonara, after Ms Parekh’s chartbusters. Written by the illustrious film critic Khalid Mohamed, The Hit Girl took us through all of the super-successful actress’ secrets including her eminently forbidden lifelong relationship with filmmaker Nasir Hussain. We like.

Shatrughan Sinha Anything But Khamosh: 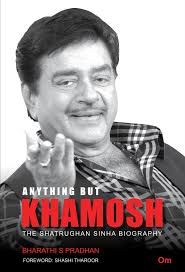 Brutally frank and not willing to gloss over his scandalous and longevous relationship with Reena Roy, nor did this biography ignore Shotgun’s conflicted relationship with his brother (the Dhoni biopic eliminated Dhoni’s brother because they didn’t get along). Anything But Khamosh is a lively and interesting read just like the subject himself. Author Bharati S Pradhan did no fawning here. She told the teekha Sinha’s tale as it is. Peppery and irreverent. 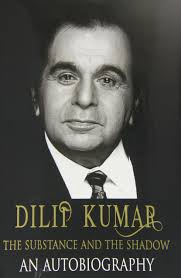 With author Udayatara Nair being a very close friend of Dilip and Saira Banu, one thought this would be an exercise in hagiography. But surprise! Shadow & Substance is a well-researched and deeply-felt probing and objective look at the life of India’s most accomplished actor. It also discussed the thespian’s romances and didn’t shy away from his brief second marriage. Proper in format but not willing to sacrifice on the improper interludes, this was a rare, comprehensive Bollywood biography.

Naseeruddin Shah And Then One Day: A Memoir: Telling like it is. Naseeruddin’s memoir is just like his performances: you can see right into the soul of the protagonist. He uses words as tools to probe into his past and doesn’t blink when he encounters uncomfortable home-truths. This is by far the most honest Bollywood memoir I’ve read. Not that Naseer would enjoy his book being branded as ‘Bollywood’.