Every year, the showbiz industry witnesses a new set of star couples tying the knot. While all of this year has been about the coronavirus pandemic, it still has not stopped multiple Pakistani artists from getting hitched. But what better time to have a small and intimate wedding than now? From Samina Ahmed and Manzar Sehbai to Sajal Aly and Ahad Raza Mir, a bevy of entertainment A-listers said ‘I do!’ in 2020. The past years, even decades, have seen the crème de la crème of the TV, film and modelling industry taking the plunge while balancing their careers at the same time. Here is our list of the top celebrity duos in Pakistan:

The Yakeen Ka Safar co-stars got engaged in June 2019. While their romance reportedly started back in 2017, it was not until they exchanged rings that their relationship became official to their fans and general public. Their on-screen chemistry is as crackling as their off-screen love life! Ahad and Sajal got married in March 2020 and hosted a destination wedding in Abu Dhabi. Their events were attended by close friends and family. The couple has featured in several photoshoots together and define the meaning of ‘picture perfect’.

Many cringed when the latter got down on one knee and proposed to his ladylove at the Lux Style Awards in July last year. They got married in December 2019 and are one of the most sought-after celebrity couples since… and the most followed on social media too! What we love about them is how they always have each other’s back no matter what. An example would be when Yasir received flak for criticizing Turkish actor Esra Bilgiç for appearing in a Pakistani mobile brand. Iqra shut down netizens instantly as she jumped to her husband’s defense, adding, “Everyone has an opinion and they have the freedom to share that.” Which man wouldn’t be happy with a wifey like that?

Currently enjoying a great vacation in Turkey, the couple is a match made in heaven! They said ‘Qabool Hai’ in November 2018 and seem to be in a happy and content marriage. They both are parents to a baby girl named Amal and together, the family of three is always winning hearts on social media. What makes them stand-out is their respective style statements which complement each other. While Muneeb has more of a cool-boy look to him, Aiman exudes some real pretty-girl vibes. We simply adore them as a pair!

Their wedding announcement came out of the blue in August, 2019. Hamza’s fans were fervent to know about how their love story began but according to him, there wasn’t any! Hard to believe since they’re not just about good looks but seem so compatible too. The couple is parents to a baby boy named Mustafa. Both Naimal and Hamza post the most adorable pictures with each other and their son on Instagram. Couple goals!

Recipe Of The Day: Ingredients To Process, How To Make Kheer For A Special Occasion 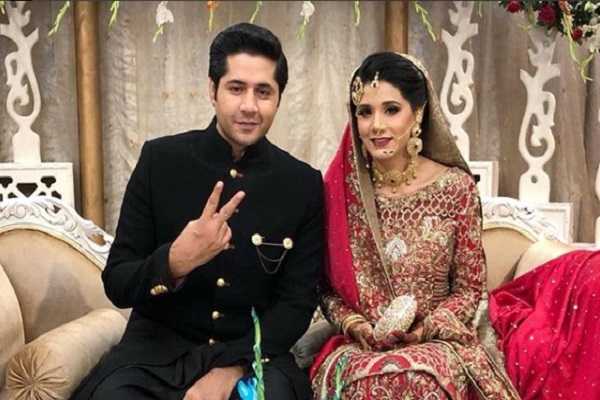 The Alif Allah Aur Insaan actor got married to his co-star Kiran Ashfaq in 2018. Their wedding was an intimate one, sans any grandeur and extravagance. The couple prefers to remain out of the public eye. Imran and Kiran have a baby boy together named Roham Imran.

Recipe Of The Day: Ingredients To Process, How To Make Kheer For A Special Occasion

Neem Soaps And Oils: Six Reasons You Should Include The Herb In Your Daily Skin Routine