Actor Omair Rana came under the radar when sexual harassment allegations surfaced against him on the internet. The star was accused by students of Lahore Grammar School for supposed misconduct while directing the institution’s annual play. The Dukhtar actor’s wife Maira Omair Rana – who worked in the administration department of the school – also faced flak for supporting her spouse. Taking to Twitter, Omair revealed he will be involving the FIA to tackle the ‘campaign’ against him. He posted, “Sexual harassment is a heinous crime and should be treated with the seriousness that it deserves. At the same time, the dignity and respect of individuals must not be falsely tainted.”

He added, “The law provides remedies for all and I intend to take all steps necessary for the vindication of my constitutional and human rights and to protect myself. For those who publish and fail to remove libelous material against me with an unconditional apology to me, I will be approaching FIA under the Prevention of Electronic Crimes Act.” Meanwhile, Maira went on to accuse “bloggers, media outlets, publications, groups, and people” for ‘wrongfully accusing her and running a campaign to malign her name.” She penned, “May justice, truth and humanity prevail.”

Sexual harassment is a heinous crime and should be treated with the seriousness that it deserves. At the same time the dignity and respect of individuals must not be falsely tainted. The law provides remedies for all and I intend to take all steps necessary …

A bevy of showbiz personalities have now come forward to lend their support to the Pyar Ke Sadqay star. Commenting on his Instagram post, actor Hina Roger Bayat wrote, “In Allah we trust, and in Allah we put our faith to do right by us! May His divine hand bring out the truth, expose the falsehood and clear your name that you have worked so hard to build.” Simi Raheel was all praises for Omair and recalled their long-standing friendship. “Your respect for humans is impossible to overlook. You are kind empathetic respectful and enlightened. I have known you a long time. You are my friend, my children’s friend! We respect you and pray that Allah will guide you to expose the injustice and lies,” she stated.

Waseem Abbas wrote, “We completely trust you and are with you bro.” Responding to Omair’s statements, actor Leyla Zuberi added, “You have our full support, go ahead, May Allah help you.” Udaari actor Ahsan Khan was quick to come to the accused couple’s defence. He said, “The world knows that you both are beautiful people. In time, the truth will be known. A good reputation is hard to destroy. Who you are as a person speaks for itself.” Ahsan mentioned it is important for people to live and let live, adding it does not matter what strangers have to say. “Plus I feel that it does not matter what people who do not know you think. What matters is that your true friends and family, the people who know you as a person can recognize what you will and won’t do.” Replying to Omair’s Twitter thread, model Iffat Umar wrote, “In the fraternity, your character is unscarred and we can all vouch for that!” 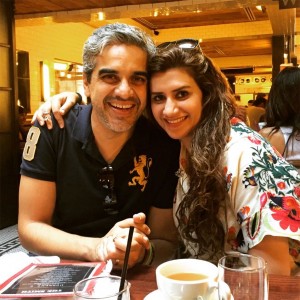 Back in June, the District Education Authority of Lahore formed a three-member committee to investigate the teachers at the Lahore Grammar School 1A1 branch, who were accused of harassing students. The decision was taken after multiple girls from the educational institution came out with their personal experiences of harassment on social media platforms including Twitter, Instagram and Facebook. Previously, the administration of the school revealed they had sacked all four employees. “They include a chemistry teacher, an admin officer, a guard and an accountant,” the school’s management said at the time. Omair and his wife noted that they will go as far as they have to in order to get justice.

How to rock a shirt dress like the Duchess of Cambridge