Aik Thi Laila Starring Iqra Aziz And Faisal Qureshi Teaser Out Now
The murder mystery play is being directed by her husband Yassir Hussain.
Since the birth of her child Kabeer Hussain, actor Iqra Aziz took a long maternity break of around 2 years but here is a piece of great news. With two dramas in a row, the queen is back with a bang. Her short play “Aik Thi Laila”, directed by her husband Yasir Hussain teaser, just released and has definitely managed to intrigue us. The 5-episode short play is going to be on aired on Express entertainment while the play is written by ace writer Faiza Iftikhar. Yasir Hussain will not only wear the director’s hat, but he will also play the lead male.
The teaser starts with Iqra Aziz casually roaming in streets while a voice (Iqra herself) says “Jaise France kai perfumes our Bengal kai tiger mashhoor hain, waise hi Punjab gali ki Laila bohat mashhoor hai (just like France perfumes and Bengal’s tigers are famous, Laila from Punjab’s street is very famous as well). Then she says, magar do sawl, Aik! Is Laila ka majnoo kaun hai? Aur yeh bhi Kai Laila hai kahan? (but here are two pertinent questions. One who is her Majnoo? And where is Laila herself?) 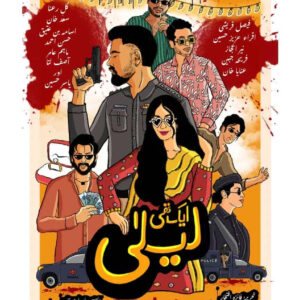 Quite intriguing! We can see many familiar faces and ace actors such as Faisal Qureshi, Hasan Ahmed, and Yassir Hussain himself in a very significant roles. Other actors also include Fareeha Jabeen, Gul-E-Rana, Saad Khan, Asif Lata, Osama Bin Antique, etc. News has it that Iqra Aziz will also be seen in the drama serial “Mannat Muraad” playing alongside lead actor Talha Chahour. Looking forward to that one as well.
Earlier there was a lot of buzz around her rejecting drama serial “Sanwal Yaar Piya” alongside actor Feroze Khan. She accused Feroz Khan then wife Alizey Sultan Khan of domestic violence and mistreatment which is why she withdrew from the project in protest.  She said, “To stay silent in the face of injustice is to side with the oppressor” and the Suno Chanda star finally broke the silence, and also the contract for Wajahat Rauf directorial. She said the decision, although a “difficult” one, was “necessary” for her not to side with an alleged abuser.

Tinkay Ka Sahara Episode 8: Sonya Hussyn is Brilliant as Qadr Though Her Circumstances Are Dire

Wehshi Episode 24: Komal Meer’s Sobia Is Surprisingly Manipulative As She Leads On 3 Men