This December has been a rather eventful month for singer Meesha Shafi. The Federal Investigation Agency (FIA) recently convicted her and eight others on December 15 in the defamation case filed by singer Ali Zafar. According to the oral and documentary evidence provided in the ​​investigation, Shafi and her alleged witnesses – Iffat Omar, Mahim Javed, Lena Ghani, Haseem Zaman, Fareeha Ayub, Syed Faizan Raza, Hamna Raza and Ali Gul Pir – were found guilty. Meanwhile, the Aya Lariye singer returned to Pakistan for Coke Studio and Velo Sound Station, releasing four new tracks. The FIA verdict resulted in a Twitter outrage with many expressing disappointment over Shafi’s inclusion in the music shows amid her high-profile legal feud with Zafar. The latter has now spoken up about the misuse of the MeToo movement in his Instagram story. 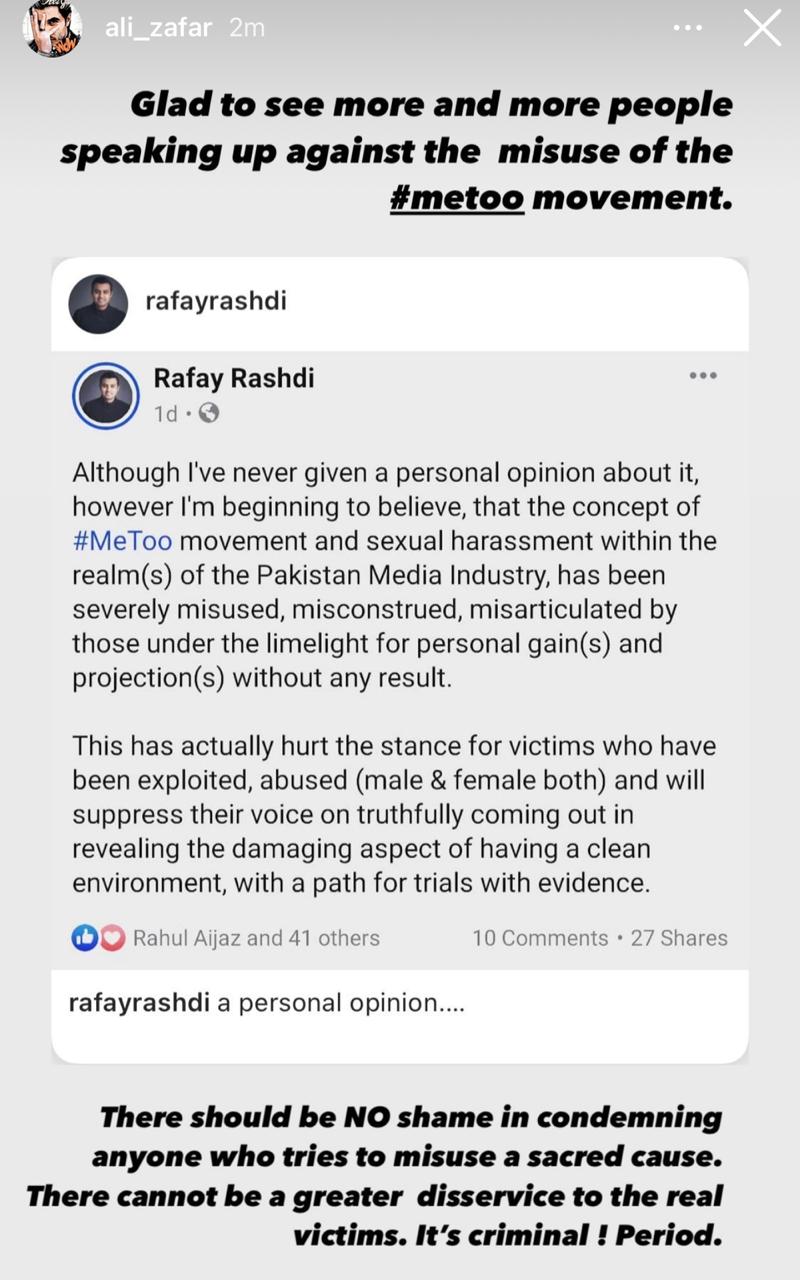 He re-posted Rafay Rashadi’s Facebook status which sheds light on the same. “Although I’ve never given a personal opinion about it, however I’m beginning to believe, that the concept of #MeToomovement and sexual harassment within the realm(s) of the Pakistan Media Industry, has been severely misused, misconstrued, misarticulated by those under the limelight for personal gain(s) and projection(s) without any result,” reads the film director’s post.

It adds, “This has actually hurt the stance for victims who have been exploited, abused (male & female both) and will suppress their voice on truthfully coming out in revealing the damaging aspect of having a clean environment, with a path for trials with evidence.” Not only Rashadi but several users on the micro-blogging site Twitter also weighed in on MeToo movement being taken advantage of. “So, Meesha Shafi can come to Pakistan for recordings but can’t face courts, her vilification drive against @AliZafarsays badly exposed by FIA. She used the #MeToo card for her own purpose and damaged the entire campaign a lot. Pathetic Meesha! #MeToo,” noted a user. Lawyer Hassaan Niazi added, “While FIA declares Meesha/Meera Shafi guilty in their chalaan. Let’s see what @cokestudio@pepsi and Velo do. Will they keep giving her contract. Will they do with her what they did with Ali Zafar? Time to condemn misuse of MeToo.” One more posted, “Thank God Meesha Shafi is officially proven guilty. More power to Ali Zafar who fought bravely against such filthy women who play the victim card for their own benefit.”