Priyanka Chopra is undeniably one of Bollywood’s biggest celebrities and has also made quite the mark in Hollywood. The actress has come a long way and has most certainly made her mark in the industry with her hard work and dedication. Due to her efforts and professionalism, the starlet has been able to land the role of the global icon that she is today. She is recognized for her work in films including the likes of The Sky Is Pink, Bajirao Mastani and Barfi among others and has also become one of the most photographed celebrities in Hollywood.

There isn’t a time when she doesn’t step out and doesn’t leave heads turning and there’s no denying that her style and fashion sense has evolved over time. The actress was last seen on the big screen in The Sky Is Pink, which marked her return to Bollywood after a brief hiatus of three years. Now, fans are eagerly awaiting to see her on screen once again, whenever that may be. We all remember her big, fat and glamorous Indian wedding when she tied the knot with pop singer Nick Jonas in 2018.

And now the actor, who has also tried her hand at singing, has turned 38 and her friends, family and fans have all taken to social media to express their love and send well wishes to the diva. And we on the other hand, are going down memory lane to look at some of Pee Cee’s most fashionable moments. 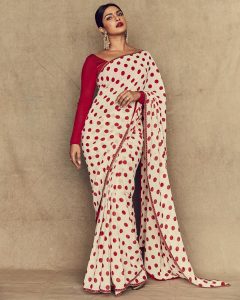 It’s a known fact that Sabyasachi is Pee Cee’s go-to designer and she has donned his designs on a number of occasions. She is also a close friend to the designer and has often left us swooning each time she struts her stuff in his designs. One memorable moment was when she sported a bold polka dotted sari by the designer. The cream-based sari was adorned with red polka dots and was paired with a full-sleeved red silk blouse;  featuring a wide boat neck. The sari features a thin sequined trimming and completes the sari in the most perfect way. Pee Cee’s moto? The bolder, the better. And with that being said, she had her hair styled with a middle parting and pulled back in a slightly scruffy bun and opted for an overall bronzed look. She opted for brown shimmery eyes and lots of bronzer and rounded off her look with a dark maroon lip. Ooh la la! 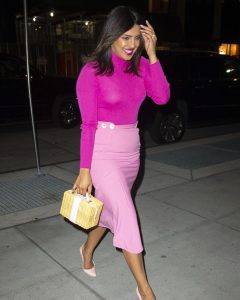 A trend that was big and relevant back in 2019 has made its way back in 2020. And we’re hopeful that it will continue through to 2021. Priyanka Chopra opted for this trend on a number of occasions and this look is one of our faves! During the promotions of The Sky Is Pink, Pee Cee opted for a fuchsia ensemble in line with the colour blocking trend. She styled a figure hugging skirt in a bubblegum pink colour which falls just below her knees with a contrasting fuchsia pink turtle neck sweater. She added a delicate touch to the look with straw basket bag and her million dollar smile. For her hair, Priyanka Chopra opted to keep it styled straight and left open while being parted in the middle. She opted for a bright pink lip, which is in stark comparison to the dark lip we’re used to seeing on her. 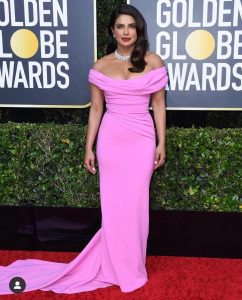 It’s hard to believe that the Golden Globes took place earlier this year. With no Coronavirus pandemic in sight, celebrities sashayed down the runway at the 2020 Golden Globe Awards including Priyanka Chopra. Being one of the most talked celebrities, fans and paparazzi were looking forward to seeing her look. We think it is one of her most iconic looks to date. Red carpet looks are not always Pee Cee’s forte but this time she certainly didn’t disappoint. The actor, who has also featured in the Jonas Brothers music vidoe, graced the red carpet in a bubblegum pink Cristina Ottaviano number which featured strapless off-the-shoulder sleeves and a short train. The dress showed off her toned physique and her vintage hairdo paid homage to old Hollywood glam. With a deep berry lip and Bulgari jewels, Pee Cee was a winner in our books!

Priyanka Chopra turns 38: Here’s how the actor is keeping fans engaged on her birthday weekend 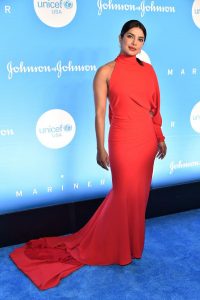 The UNICEF Goodwill Ambassador attended the 15th Annual UNICEF Snowflake Ball at Cipriani Wall Street in New York in 2019, in a head turning look. She was clad in a bright orange statement gown at the blue carpet. Priyanka Chopra wore a coral one-shouldered, turtle neck gown which featured a train at the back. The dress was also cinched at the waist and showed off her toned physique. The The Sky Is Pink actress opted to have her hair tied back in a sleek, middle-parted ponytail and minimal makeup with matching nude lips. She opted to style the look sans accessories, save for her diamond earrings to make a statement. We’ve been swooning over this look!

6 reasons we swear by a jade roller