Atiqa Odho To Star In Turkish Series “Koyu Behaz”
Atiqa Odho is all set to appear in her debut international project.
Pakistani entertainment industry Is going places and how. Humayun Saeed is getting rave reviews for his impactful character of Dr. Hasnat in The Crown series. Sajal Ali is all set to appear in her first Hollywood movie “What’s Love Got To Do With It?”.  Fawad Khan and Mehwish Hayat played a short role in Ms. Marvel. Not just actors our movies are doing pretty well on international platforms and receiving a lot of accolades for their unique storylines.
News has it that senior actor Atiqa Odho is all set to appear in the Turkish drama serial “Koyu Behaz”.  This is going to be the veteran actor’s debut in an international project.  The Turkish production company, RGB Production, took to their Instagram and welcomed the actor on board. They wrote, “Welcome to Off White family dear Atiqa Odho. It’s an honour for us to work with you. We wish you good luck during the shooting marathon. 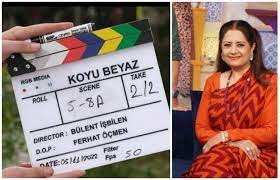 Atiqa Odho will be working alongside big names like Nisa Bölükbaşı Atakan Hoşgören, Atabiq Mohsin, and Ebru Akel. The drama will be directed by ace director Bulent Isbilen. The casting list also includes Pakistani host Tauseeq Haider to be part of the project as well.  Another Pakistani model and actor Atabiq Mohsin will be accompanying her on the sets of Koyu Behaz. Also, The storyline is yet not revealed but it has grabbed enough attention from her fans already.
Must say, it is a great piece of news for all the fans in Pakistan as they are already huge fans of Turkish dramas, and watching Pakistani stars in it will be like the cherry on top. The viewership will be out of the roof for sure with the collaboration l between Pakistan and Turkey.