The trailer of David Dhawan’s Coolie No 1, a remake of…. Err…David Dhawan’s Coolie No 1 just released. Should we rejoice? Should we wait with bated breath for Christmas day when this mishmash of an original film (which was no great shakes in the first place) winds its way into our homes to cheer us up in this cheerless year of disease, depression and death? I am afraid the answer is in the negative. The remake of Coolie No 1 looks so eager to please, it ends up trying too hard. Everything is disproportionate in the trailer, and that includes Varun Dhawan’s drag act where he looks exactly like Varun Dhawan without the dress and lipstick. Then, when he starts to dance with Sara Ali Khan, it hit me hard. 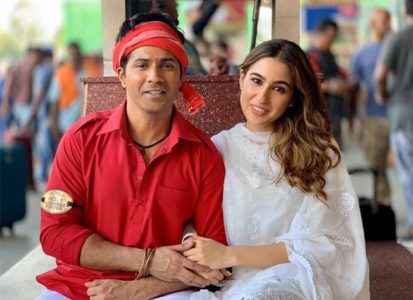 I miss Govinda so much. He was such a spontaneous outburst of crackerjack moves. This one looks like an imposter, a wannabe Govinda trying so hard to have fun with the slapstick material but proving over and over again that there can be only one Govinda…or Karisma Kapoor, for that matter.

When we see Varun and Sara join hips to do Tujhko Mirchi Lagi Toh Main Kya Karoon, toh mujhe bhi bohot zore se mirchi lagi. Why try so hard to replicate a kitschy magic that we left behind in the 1990s? Luckily, Varun doesn’t imitate Govinda. He wouldn’t dare. But he does mimic Mithun Chakraborty more than once in the trailer. And…it’s not amusing. Sorry. I just sat back and watched the trailer hoping some spark would ignite at some point. I could only think of Govinda and what a wonderful world of wacky antics David created in his company when his son was not born and nepotism was just a word in the dictionary. It’s not just Govinda who we miss sorely while watching the trailer of the new Coolie No 1. Another actor we deeply miss is Kader Khan. Paresh Rawal is a fine actor. But watching him do a Kader Khan is like watching Johnny Walker do a Mehmood.