What was once a fast-paced show with interesting twists and turns in each episode has now come to a point of stagnancy.  While the introduction of Syed Jibran’s Khurram, the entire show has not only begun to drag, but the story has become regressive in nature.  As episode 15 opens, Sanam (Hania Amir) is now partying alongside Khurram, building her social circles and (gasp!)……watching movies.  What a bad girl!  Well, she actually might be, but only for horribly neglecting her own child.  On the other end, Khurram (Syed Jibran) has his court marriage with Natasha and now has two wives. 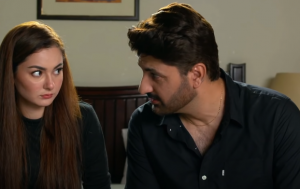 Ghazala (Marina Khan) has turned into a stereotypical, judgmental woman while on the hunt for her beloved Arsalan’s bride.  Conveniently forgetting her plight with Iram, Ghazala is now rejecting girls left and right unapologetically.  However, when she finally does settle on Arsalan’s bride, her choice arrives as a cruel twist of fate.  Arsalan’s to-be bride is Sehrish, Junaid’s (Shehroze Sabzwari) cousin and not-meant-to-be fiancée.  With Junaid’s mother seething over Junaid’s refusal to marry and illogically blaming Sanam for his decision, this will be yet another thorn in Sanam’s side.

What’s irritating about this show, more than anything, is how Sanam does not have a growth arc at all.  Sanam was fickle, she got married, she lost her husband, had a child and understood life as a widow.  And yet now, she is adapting to Khurram’s lifestyle, changing into a different Sanam, a Sanam who is neglectful of her child.  Why can’t there be a balance?  Sanam has been through a lot in her young age already and while she was very fickle, she did change after marriage.  She was not only a loyal wife, but also a devoted daughter-in-law and a good mother.  Yes, she made mistakes but as I’ve said before, those mistakes are not life-destroying mistakes.  For how long will society blame a woman for the mental health of another individual?  Yes, Sanam flirted with Junaid and led him on – but don’t men do this too?  When men do it, it’s a “boys will be boys” situation.  When women do it, it’s suddenly time for karma to strike and the woman cannot move on in life?  This concept is just not digestible.

Dil Ruba Episode 13: Syed Jibran’s Khurram Is Not What He Seems

At present, there’s little to root for in “Dil Ruba.”  Are we supposed to root for Sanam? And if so, how can we do so when Sanam is abandoning her child to “party” all day and night?  Are we supposed to root for Sanam’s “payback”?  But why would we when Sanam’s “crimes” are not crimes at all, rather the foolishness of youth?  The greatest issue with this show is that Sanam cannot catch a break – and it’s difficult to understand why, because the entire plot just seems like yet another excuse to blame and shame women.