Google has revealed that the historical Turkish drama Dirilis: Ertugrul was leading Pakistan’s movie and TV searches of 2020. It grabbed viewers’ attention more than second-ranked Pakistani drama Meray Paas Tum Ho. Dirilis: Ertugrul started airing in Pakistan in April 2020 and won thousands of hearts nationwide. It was literally being watched in almost every Pakistani household. Following its soaring success, it was revealed that Turkey and Pakistan will be collaborating on an exciting venture in a bid to promote the entertainment industries of both countries. Pakistani actor Adnan Siddiqui disclosed that Tekdin Films, which is the name behind the hit series, will be working with Pakistan’s TRT Films. 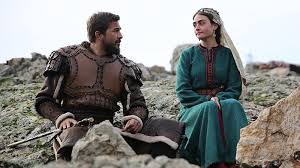 Fans of the show fell in love with the two lead actors, Ertugral played by Engin Altan Düzyatan and Halima Sultan played by Esra Bilgiç. With record-breaking views, it aired on state-run television PTV, dubbed in Urdu. In March, when the Covid-19 pandemic first broke out in Pakistan, it caused a major setback for the TV industry. Soon after, Prime Minister Imran Khan recommended watching Dirilis: Ertugrul in an effort to promote Islamic culture and values among youngsters. “I warned against copying the west and Bollywood alike but people said this is what the public wants to watch. Ertugrul is also one of the most widely watched series, it doesn’t have any obscenity,” he said at the time.

Burj Khalifa To Be Lit Up With Select Messages On New Year’s Eve: Send In Yours Now!

Moreover, Bilgic is the ninth-most searched personality in Pakistan in 2020 revealed the latest Google Search Trends. She catapulted to fame not only because of the acclaimed TV serial but also after being featured in several Pakistani advertisement campaigns. “When I saw the Prime Minister Imran Khan of Pakistan on Turkish news channels, saying that a successful project such as Ertugrul should be aired on their local channel, I felt surprised and proud at the same time. If we didn’t have a pandemic upon us, I would have visited Pakistan several times by now,” she said. Duzyatan is currently in Lahore for a short visit. The news was revealed on Pakistan in Turkey’s (PakTurkey) official Twitter handle. It read, “#ErtugrulGazi (Diriliş Ertuğrul) lead actor Mr. Engin Altan Düzyatan just landed at Lahore Airport for a short visit to Pakistan at the invitation of a private business company. Join us to welcome him.”

Dulhan Episode 11: Sami Khan’s Mekaal Stands Out As He Realizes His Feelings For Amal