EXCLUSIVE: Humayun Saeed On His Role In “The Crown”

Humayun Saeed is a household name in Pakistan, an actor associated with excellence and superstardom.  When his name was announced as part of the fifth season of “The Crown,” Pakistani fans were overjoyed at this unexpected addition.  While Humayun Saeed has portrayed many different characters over the years in Pakistan and has worked in Bollywood, this is his first foray into the international space.  With season five of “The Crown” releasing soon on Netflix, Humayun sheds light on his upcoming role in an exclusive with The Brown Identity.

You are a superstar in Pakistan, a household name.  What were your thoughts when this opportunity initially presented itself?

I was pleasantly surprised when this opportunity came to me. I was not aware that casting was happening for this show nor did I know Dr. Hasnat Khan’s character was going to be part of the “The Crown.”  When Hamid Hussain, who is my talent agent, called me and, after signing an NDA, revealed the details of the show and role, it was a nice surprise. 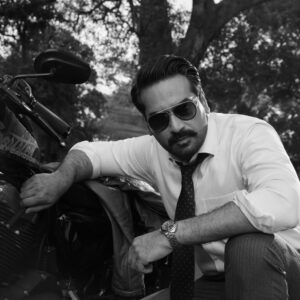 How did the process for getting this role in The Crown differ from getting a role in Pakistan?

I had to audition for this project! That is how it works internationally. Your talent agent gets you opportunities, you audition and then things move forward. I haven’t auditioned in Pakistan since my initial days, but this is the norm internationally. After my audition, the director did an online audition with me as well and then, as an extra step, they even did a chemistry test with me and Elizabeth (Debicki) before making their final decision.

The world has a unique relationship with the royals, which means all eyes are on this show.  How does it feel to play Princess Diana’s love interest?  In your decision to play this character, were you at all concerned as to how this will reflect Pakistan or be received back home?

Being part of “The Crown” is a privilege, but also a huge responsibility. Princess Diana had a beautiful relationship with Pakistan and Dr. Hasnat Khan is someone everyone, both within Pakistan and globally, knows due to his connection with Princess Diana. Many of the characters are family members and public figures – and people naturally have strong feelings about them.  I was definitely concerned about the role as it was a huge responsibility on my shoulders, as all eyes are going to be on every little thing portrayed in this series.  But when read the script, I realised Peter Morgan has portrayed every character very sensitively.

How did you research and prepare to play this role?  Despite this being a fictional retelling of the story, did you feel any pressure regarding your portrayal of Hasnat Khan?

The creatives on this show have presented me as never been seen before. The creatives and I discussed what they had planned for my character in terms of the look, the way I would dress and behave. I had to gain some weight for this character, which is unlike any role I’ve worked on in the past. I even had a workshop with a surgeon to learn how a doctor would behave and react in a hospital environment.

How was it working with the cast, specifically Elizabeth Debicki?

She has been an amazing co-star. She is so passionate about her work and the effort she puts in is just amazing. I had already done an online script-reading session with her before I got to London.  Once in London, I met her for the first time for a rehearsal on-set and we clicked immediately. We spoke about Pakistan and she was very interested in our entertainment industry, culture and people. Was there anything in the script that surprised you as an actor or a character defining moment that made an impression?

This is a type of character I have never portrayed on screen, but the amount of homework that had already been done for this role by the creatives was immense. One thing that stood out for me was that Dr. Hasnat Khan was the total opposite of Princess Diana. He was an ordinary looking, introverted, simple guy and this simplicity is what attracted Princess Diana towards him. The writers had already done a great job in recreating that, which left me with the herculean task of bringing this to life on screen.

Now that you’re a part of the royal family by association, what’s next for Humayun Saeed?

Even I do not know what’s next, but I am sure whatever it is, it will be good and my fans will enjoy it.

Humayun Saeed’s film “London Nahin Jaunga” released earlier this year in July 2022 and was a hit.  We hope his stint on “The Crown” proves to be another success in his career.  Season 5 of “The Crown” premieres on Netflix on November 9, 2022.