Get Your Banana Pudding Fix For Only Dhm.5 In Celebration With Magnolia Bakery’s National Banana Pudding Day
On this special day, let’s reveal to you the cult recipe that has been shared by the bakery itself. Layers and layers of rich creamy goodness made with fresh bananas, vanilla wafers, and fresh vanilla pudding made right from scratch!! Yup, you guessed that right. It is the same golden pudding perfection that sells like hot cake in the famous cupcake bakery The Magnolia Bakery. Here is a fun fact about the Magnolia Bakery. The famous cupcake chain got its fame when it appeared on Sarah Jessica Parker Starrer’s famous “Sex And The City” show almost a decade ago. But nonetheless, it is going strong with its beloved dessert the banana pudding.
For all the uninformed banana pudding fanatics, here is some good news waiting for you. Magnolia Bakery is celebrating its annual National Banana Pudding day. And celebrating it with great fervor we must agree.
Get Your Favourite Banana Pudding On 29th Of August For just Dhm. 5 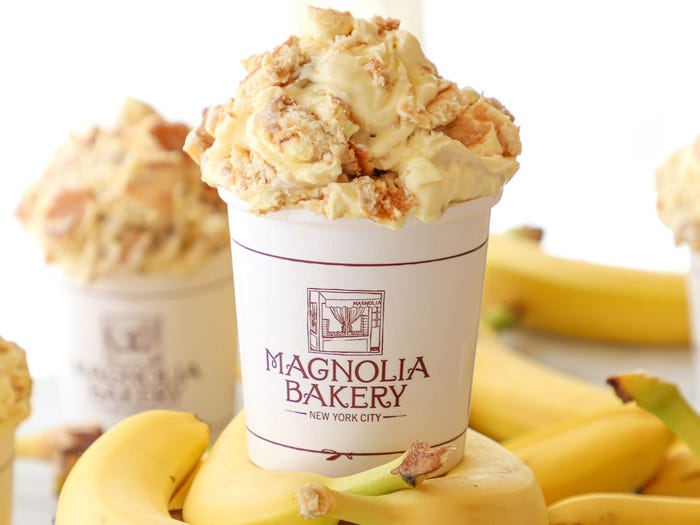 The great folks at Magnolia bakery are selling their famous Banana pudding for just dhm.5 on the 29th of August. Up to 6 cups of the golden creaming banana pudding can be bought at dhm. 5. Now you must be wondering where to go? You can find Magnolia Bakery at The Dubai Mall, Dubai Festival City Mall, Golden Mile on Palm Jumeirah, and The Galleria Al Maryah Island Abu Dhabi at the luxury collection and new extension branches, while stock lasts.
Do You Know Magnolia Bakery Has Shared Their Original Banana Pudding Recipe? Well, We Have It Straight From The Horses’ Mouth: On Magnolia Banana Pudding day, we reveal to you the OG recipe that has won millions of hearts over the years. To make Magnolia’s classic banana pudding, you will need
1. 4 to 5 ripe bananas, sliced
2. 11-ounce box of vanilla wafers (Nilla Wafers are recommended)
3. 3 cups of heavy cream
4. 1 package of instant vanilla pudding mix (Jell-O is recommended)
5. 14-ounce can of sweetened condensed milk
6. 1 ½ cups of ice-cold water
Recipe:
To begin Magnolia’s recipe, start by whisking the milk and cold water.
• Add the pudding mix into a separate bowl and slowly whisk in your milk-and-water mixture for about a minute, until it’s smooth and lump less.
• Cover the bowl and refrigerate it for at least an hour. You can also just leave it overnight.
• Once your pudding mixture is ready, whisk your heavy cream until stiff peaks form.
• Add the pudding to your whipped cream and mix until they’ve fully blended.
• Spread a quarter of your pudding over the bottom of a bowl. (Bobbie Lloyd, Magnolia’s chief baking officer, recommends using a trifle bowl or a wide glass bowl.) Add a layer of vanilla wafers and enough sliced bananas on top to cover them. Repeat twice.
• To finish, add one final layer of pudding and any of your additional cookies or crumbs on top.
• Then cover your bowl with plastic wrap and refrigerate it for four to six hours.
• Lloyd recommends serving the banana pudding within 12 hours.
Now tell us who’s stopping you from having that yummy goodness? Dug your spoons in your favourite dessert and enjoy. Bon Appetite!!