Hum Tum Is Breaking Norms And Sending Some Important Messages, Are You Listening?
We are totally in love with the Ramzan drama serial Hum Tum starring Sarah Khan, Junaid Khan, Ramasha Khan, and Ahad Raza Mir in the lead roles. It has connected with the masses on so many levels be it the dysfunctional families or day-to-day bickering between neighbours as well as their fun banters. It has added a whole new dimension to the drama serial Hum Tum. But despite all the fun and laughers, we get to enjoy every day, there are some important points that Hum Tum is raising and we are loving it. The writer Saima Akram Chaudary has made Hum Tum way more than light-hearted comedy and raised some important points.
Take Care Of Mental Health Of The Family Elders 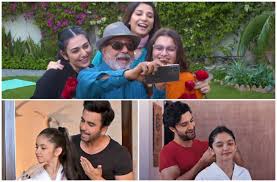 Though we are seeing Syed Muhammad Ahmed aka Dadu as the best crony to his granddaughters and a famous tik toker who is found in hot water every now and then with his antiques, underneath all of the fun façades, the writer has highlighted the depleting mental health elderly in the family go through and how important it is to support them when they need support from the family members.
Break Gender Stereotypes 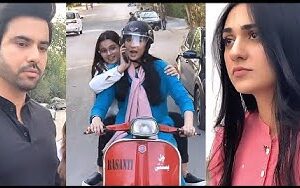 Neha (Ramsha Khan) is seen riding a Vespa scooter instead of taking up the car rides to Sarmad cooking up a storm in the house for everyone. From Aina Asif taking karate classes to dadu being a famous tik toker, to Maha being a fitness freak, and Neha with her immense competitiveness is definitely breaking all the stereotypes.
Marrying A Divorcee Is Perfectly Fine 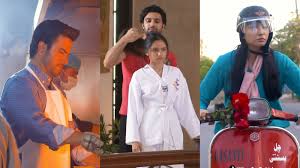 Sarah Khan aka Maha, a fitness freak who is playing the eldest daughter is shown as a divorcee who moves on to make it ahead in life. Sarmad is shown hopelessly in love with her who is wholeheartedly ready to accept her and is certain that their marriage is definitely to work as she is the best choice as a life partner. Society needs to take some important notes from this aspect of the drama serial.
Marrying Someone Less Educated Should Not Be A Roadblock
Since Junaid Khan aka Sarmad loved to be a chef and open a restaurant, he is shown to pursue his dream and couldn’t complete his education. However, the drama shows that it is mental compatibility that is extremely important and one should not dwell too much on education. A man whose family values are intact and one who respects women is all that should matter in the end.
Bring back The Special Bond With Your Neighbours 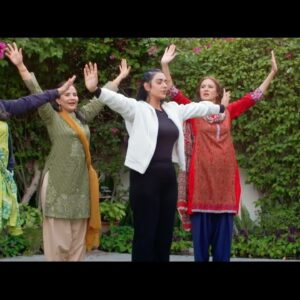 Today at this age and date, when bonding with your neighbours has become an old norm, HUM Tum is trying to revive the tradition by showing us that neighbors can be like an extended family. Let’s bring back those times and take out some time for the neighbours and interact with them whenever possible.
Give Daughters Their Due Rights In Inheritance
In case of no male heirs, the property should be distributed to the daughters in the family. Fathers should divide property amongst daughters while they’re still alive to ensure they get their rights.