Dubai’s Global Village is among the largest entertainment destinations for food, shopping and a whole lot of other fun. In latest news, the platform has added yet another feather to its cap after creating another Guinness World Record with the “Largest Pin Badge Word” in the world. On the occasion, Global Village celebrated International Happiness Day with pavilions lit in yellow smiley faces adorned on both, the largest underwater screen and the iconic Wheel of the World, reported Gulf News. 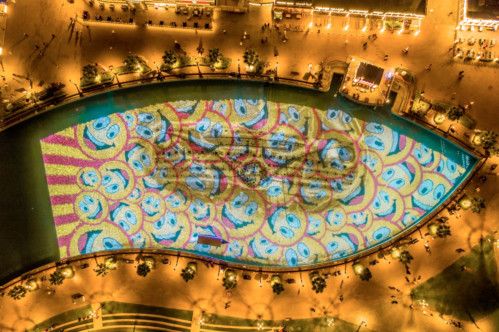 Global Village also announced a name-change of Kiosk Street to Happiness Street. The new street sign is made up of over three thousand smiley-faced pin badges forming the words ‘Happiness Street’. This street sign is officially the “Largest Pin Badge Word” in the world. Upon achieving this feat, the multicultural family destination has moved closer to its target of 25 Guinness World Records titles in honour of its 25th anniversary.

The Global Village team also recently claimed the record for ‘Most people in a video relay holding a sign’ as part of a larger internal campaign to promote the Covid-19 vaccination among its staff and partners. More than 60 members of the Global Village family joined a video call to foster the vaccination drive, with all participants holding a sign that read, ‘I’m Vaccinated. Are You?’. According to Gulf News, 100% of permanent staff members at Global Village have now received the jab, with the next aim being to vaccinate all the partner teams.