Love birds Iqra Aziz and Yasir Hussain are the epitome of a perfect couple. From cheering each other on to uploading the most adorable snaps, the power duo is one of the most sought-after pairings in showbiz today. Hussain recently announced his upcoming directorial debut Dori, which will be released under the banner of KMJ productions. His ladylove left no stone unturned in rooting for him as she took to her Instagram stories to wish him luck and success. “I am so excited. Best of lucky baby,” Aziz wrote on the photo-sharing platform. 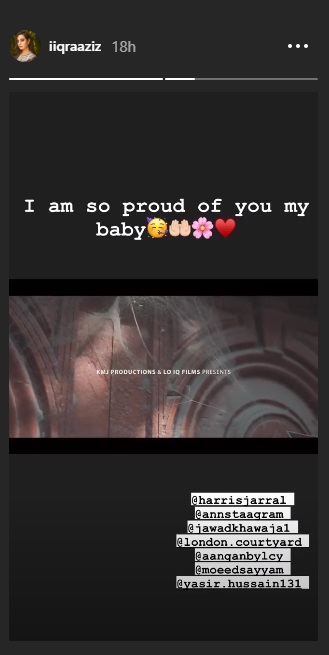 She then went on to share a short snippet from the project. “I am so proud of you baby,” she wrote in the caption. Aziz has become a widely popular star following her stellar stint in the acclaimed TV series, Suno Chanda. Both go-getters in their own right, Aziz and Hussain are gripped with taking their respective careers to greater heights, something the latter revealed back in April when he was asked about starting a family.

We both like children but we are not planning kids anytime soon as I think Iqra needs to focus on her career. When your career is flourishing, this is an extra responsibility,” he said, while appearing on Reema Khan’s Ramazan transmission. Aziz, too weighed in on the secret behind a successful marriage. “Patience is key for a successful married life,” she stated. The star couple tied the knot in December last year amongst close friends and family. They hosted a series of events with the who’s who of the Pakistani entertainment industry in attendance.

Could Kamala Harris' Win Inspire Meghan Markle To Go Into US Politics? This Celebrity Biographer Thinks So