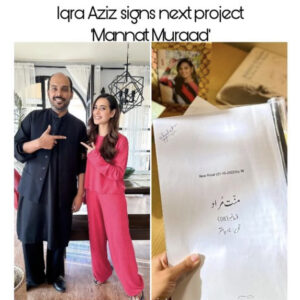 Iqra Aziz will be seen next in the drama serial “MAnnat Murad” alongside Farhan Saeed. Mannat Murad will be directed by the ace director Wajahat Hussain Syed. The drama will be the 7th Sky Entertainment banner. Iqra Aziz is also currently shooting for husband Yasir Hussain’s directorial debut drama Ek Thi Laila. Ek Thi Laila is a short 5-episode series that will most likely be a murder mystery. Yasir Hussain will not only wear the director’s hat, but he will also play the lead male. Earlier there was a lot of buzz around her rejecting drama serial Sanwal Yaar Piya alongside actor Feroze Khan. She accused Feroz Khan then wife Alizey Sultan Khan of domestic violence and mistreatment which is why she withdrew from the project in protest.  She said, “To stay silent in the face of injustice is to side with the oppressor” and the Suno Chanda star finally broke the silence, and also the contract for Wajahat Rauf directorial. She said the decision, although a “difficult” one, was “necessary” for her to not side with an alleged abuser.

Daraar Episode 28: Syed Jibran and Amar Khan’s Performances Stand Out In This Tale of Deceit

The Mirza Malik Show To Start Very Soon On UrduFlix