Kajillionaire Is A Strange Stirring Drama

If a lockdown had a human form, it would be Evan Rachel Wood in this extremely strange film about a peculiar family doing weird things. She plays a strange daughter of a freaky dysfunctional family where her parents have reared her to be a chronic scamster. Petty crime is their way of life. The three-member family is so strange in its insulated emotionless togetherness that we as an audience feel uncomfortable watching them. Is it possible for parents to use their only child as a tool for petty income? Is it possible for the child to grow up so tightly wound and repressed that her words come out in a staccato stream of disembodied sign languages? To be decoded by anyone cares to. Sadly, no one cares. Wood has played a severely disturbed girl earlier in a film called Allure. Nothing prepares us for her performance in Kajillionaire as a girl on the verge of a nervous breakdown, functional as a tool in her parents’ life to the point of being non-existent. She is so much just a tool of utility in her parents’ life that it hurts to even see the parent-child bonding reduced to this grotesque mimicry of genealogical serviceability. 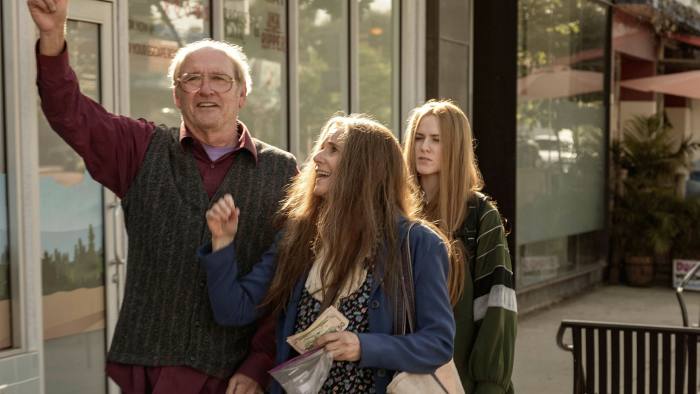 It’s as though the parents hated their only child from the start. Why else would they name her something as bizarre as Old Dolio Dyne? Into this bleak barren brutal life comes Melanie (Gina Rodriguez) who happily joins Old Dolio and her parents in their sleazy scamming which includes claiming insurance for lost luggage and breaking into homes of old, helpless, dying people and cleaning them dry. These are not people you would want to invite home for dinner.

Melanie is that one ray of hope for Old Dolio of redemption. The abused daughter pines for love. Melanie gives. There are lots of twists and turns before the proverbial happy ending. But the behavior of the parents (played by seasoned veterans Debra Winger and Richard Jenkins) remains baffling in its brutality to the end. Could it be that Old Dolio was a child they found in a dumpster and treated her like trash into her disturbed adulthood? As a deeply disturbing meditation on the fractured nuclear family and the supremacy of greed over deeper emotions, Kajillionaire and its dry impervious tone of narration is deeply unsettling. While Wood with her ironed hair falling on both sides of her face with a ferocious implacability is a portrait of an emotional lockdown, the film itself replicates her emotionless conduct, leaving us with a situation that spares no emotions. It has none to spare.