Ludo Is The Best Film Of The Year

Pankaj Tripathy, delightfully droll and wickedly wise as a chawl-level ganglord. The grammatical gaffe notwithstanding, every character in the film would have to agree with Pankaj Bhaiyya. Who would dare not to? Look at what life rolls out for Akash Chauhan. He had just about put to rest his feelings for the brazenly materialistic Ahana (Sanya Malhotra) when a video clip of their nocturnal activities crops up on everyone’s phone. If you consider the fact that Akash has a talent for ventriloquism you would know what the couple is in for with the voyeuristic video.

Aditya Roy Kapoor is just splendid as Akash. What a fine actor he has shaped up into — physically and emotionally. Unfortunately for him he is outstaged by his colleagues Rajkummar Rao, Abhishek Bachchan and the ubiquitous scenestealer Pankaj Tripathy. These actors have never been better as they sink their hungry teeth into a plot that is genuinely funny and incisive, filled with warmth and sunshine, and replete with some of the wackiest coincidences you will see on screen on this side of Woody Allen’s cinema. 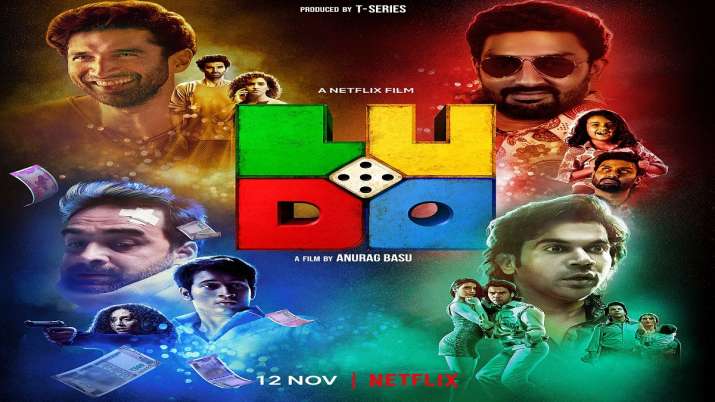 The languorous humour and the self-deprecatory laughs make Ludo the most engaging film of the year. A pity we have to watch it at home. Ludo belongs to the big screen. It is big in plot, emotions, performances and production value. This time Anurag Basu has done the cinematography himself. He knows exactly which tonal complexion to adopt for every character. They resiliently come out as definitive decisive individuals with massive quirks and eclectic eccentricities.

Rajkummar Rao is delightful as the lovelorn multi-talented Aloo who allows himself to be happily exploited by his former girlfriend Pinky (Fatima Sana Sheikh, who wears too much lipstick even in the most trying times). Pinky uses Rao’s Aloo the way potatoes are used in vegetables. This is unrequited love at its absurd-est. Every time Rao weeps in a lovers’ grief we try not to laugh.

Rohit Suresh Sharaf and Pearl Maaney as two abused working-class drifters who come together in the shared bond of mutual greed don’t fall short in trying to get our attention. Every character is memorable in his or her highly forgettable place in society. Everyone pines for some love and attention, be it the little neglected girl Mini who forms the kind of emotional tie with the goon Munna that Balraj Sahni had formed with his little Mini in Kabuliwalla.

Abhishek Bachchan’s grief-stricken anti-social’s part left me the most moved. Everyone is on the run constantly in this fast-paced emotional rollercoaster ride about people who have seen better days. Frayed at the edges, tired and dejected the characters of Ludo are waiting for redemption, none more so than the ganglord Sattu Bhaiyya (Pankaj Tripathy who makes every ganglord seem so different) who lands in the hospital with a thud and promptly falls fora Malayali nurse (Shalini Vats, excellent). Together they take off on a Boney & Clyde joyride which would drive even the original pair into despair. Crazily out of control, these characters are driven deftly into a melee of madnesss and steered expertly out of the mess y a director who has never been in a better place. Welcome back, Mr Basu. Jagga Jasoos is forgiven.