Minal Khan Or Kylie Jenner: A Case Of Copied Instagram Story That Has Twitter-verse In Fits Of Laughter
An Instagram story of actor Minal Khan has been making rounds on social media. 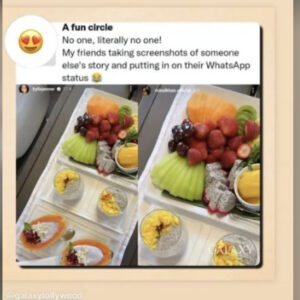 Recently, Actor Minal Khan has been at the receiving end of being trolled and mocked. The Jalan actress who along with her husband Ahsan Mohsin Ikram is quite famous for their travel excursions and bless us with some picturesque views on their Insta handle have come under fire for all the wrong reason. On Monday, Minal Khan posted an Insta story that looked like a beautiful assortment of freshly cut fruits on a platter for soul satisfaction and social media has been accusing her of stealing American star Kylie Jenner’s Insta story and using it as her own.
Twitter is having a field day since then and we can’t blame them.
Twitterati Appalled At The Audacity To Pull Something Like That
Minal Khan enjoys whooping 9 million followers and her fans are confused whether to laugh or be appalled at the audacity to pull something like that. A Twitter user quickly pointed out that if she thinks her audience doesn’t follow a global star like Kylie Jenner? Another user judged that celebrities like Minal Khan can’t help but have a fetish to look elite. Some Trolled Her By Saying “Kelly Jenner, please stop stealing Manal’s stories.”
See the basic rule is to at least give credits if you are copying someone’s original content or at least gives credit where it was necessary. In Minal Khan’s case, both of the conditions weren’t met which is why social media users refuse to let go of the matter and memes are unstoppable.
Social Media Users trolled by Saying That Minal And Kylie Were Having Breakfast Together
From sarcastic remarks to people asking her to stop embarrassing herself, here’s how Twitter is roasting the Jalan actor. 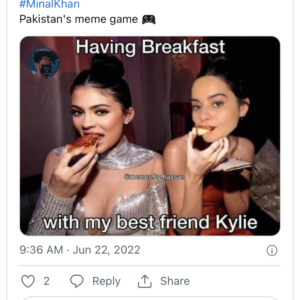 Model And Actress Amna Ilyas Asked Minal Khan To Share Her Fruit Platter As Well
Riding on the bandwagon, actress and model Amna Illyas posted an Insta story that showed her platter of fresh fruits and sarcastically tagged Minal Khan in the post asking her to share it as well. Minal Khan Finally Relied on To All The Trolls Calling The Post As The “Soul Satisfaction:
Khan’s reaction to the memes was re-sharing one of them, saying posting a screenshot of someone else’s story equates to “soul satisfaction” for her.
Minal Khan’s Manager Khawar Abidi Reminds Social Media Users To Stand Against Trolling
The actress manager Khawar Abidi wrote on his Insta story “Just a few days back we all were condemning online bullying and harassment and today we are back at it! #doublestandards #weneverlearn Savera Nadeem Is The Star Of “Wehem” After The First Episode

Aik Sitam Aur Episode 46: After Many Subpar Episodes, Ushna & Shehroze’s Marriage Is Back On Track!