The horrific Lahore motorway gang-rape has urged Pakistani celebrities to speak up and play their part in protecting the rights of women and children. According to the child protection NGO Saahil, more than eight children were subjected to sexual abuse on average every day in the first six months of 2020. Nearly 53% of the total children who have fallen victim to such heinous crimes are girls, while 47% are boys. From commoners to human rights activists and entertainment personalities, everyone has had enough and wishes to see a change in the way in which women are treated in Pakistan, while also demanding a severe punishment for rapists. Actor Mahira Khan has also expressed deep concern over the incident. 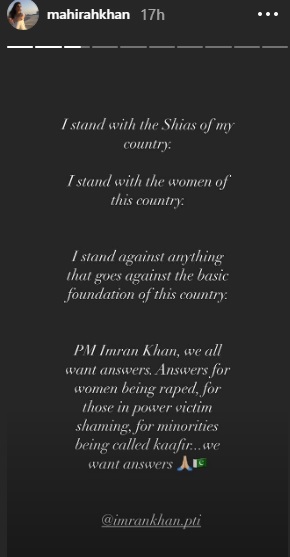 The actor took to her Instagram stories last night, writing, “I stand with the Shias of my country. I stand with the women of this country. I stand against anything that goes against the basic foundation of this country.” She continued, “PM Imran Khan we all want answers. Answers for women being raped, for those in power victim shaming, for minorities being called Kaafir (non-believers). We want answers,” alongside the prayer and Pakistan flag emojis. She also tagged the premier’s official Instagram handle.

Earlier, Mahira uploaded another thought-provoking post on the photo-sharing platform. Her image read, “It is both a blessing and a curse to feel everything, so very deeply.” The Raees star also shared a very famous quote by legendary writer Saadat Hasan Manto, which speaks about women only being safe inside their homes but being considered “meat shops” if they are seen loitering about or working at offices. Mahira captioned the post, “Hang them! Kill them! Publicly shame them! – It won’t change a thing. The problem is so deeply ingrained within our society,so deep rooted that even the officer said – ‘she shouldn’t have left at that time. This is the way our society is’. We are immune to it. We are ok with it.”