Pakistani Celebrities Who Tied The Knot In the Year 2022
As the year 2022 draws to a close and we look back at it, we see many Pakistani celebrities tied the knot and are happily enjoying marital bliss. Whether they opted for a secret, private wedding ceremony or an all-out extravaganza, these celebrity couples all have one thing in common, they’re married. From celebrity wedding of Saboor Ali to Ali Ansari, Hiba Bukhari to Arez Ahmed, Vlogger actor Marium Nafees, and Areeba Habib, to Tik Tok couple Zulquernain and Kanwal Aftab. Let us give you a little insight into these newly wedded couples.
Saboor Aly And Ali Ansari: 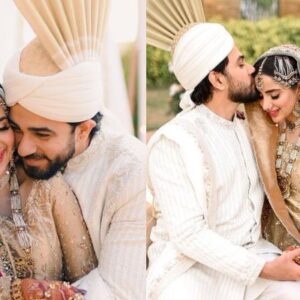 Actor Saboor Ali and Actor Ali Ansari tied the knot in January 2022. Both belong to the showbiz industry and both seriously enjoy a fandom of their own. Actor Marium Ansari, who is also Ali Ansari’s sister played the cupid and helped them get to know each other before tying the knot. We remember Saboor Aly brilliant performance in Parizaad and is often compared with her sister actor Sajal Aly while Ali Ansari’s performance in Rang Mahal has been immensely appreciated.
Hiba Bukhari And Ariz Ahmed: 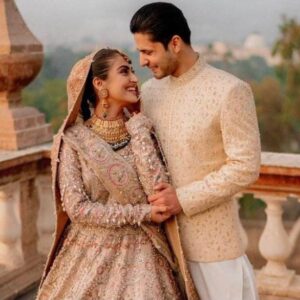 What started as a game of persuasion from actor Arez Ahmed’s side materialized and eventually after waiting for a year or so, actor Hiba Bukhari said yes. They also got married in January 2022 and have made a gorgeous bride and groom. Hiba Bukhari is known for her impeccable performance in the drama Mere Humnasheen as Khajista. While Arez Ahmed is also playing great roles and televises as well as Pakistani movies.
Maryam Nafees And Amaan Ahmed: The cute actress ties the knot with a filmmaker and woah, what a beautiful Jodi! Maryam Nafees and Amaan Ahmed chose a daytime Nikkah ceremony with only close friends and family members on 25th March 2022. The bride looked absolutely breathtaking in a white wedding trousseau. Moreover, they had their dholki, baraat and valima later. All the pictures came out beautiful and we love how Mariyam was a happy and chirpy bride.
Areeba Habib And Saadain Sheikh: 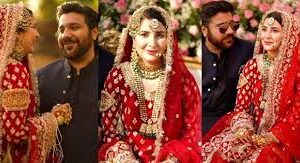 Actress Areeba Habib got to engage Saadian Imran Sheikh. Her engagement with Saadain Sheikh happened on august 2nd and the couple shared the wedding card with her fans on January 2nd. Announcing the date, she also shared her preparations and invitation card with sweets and candles named Areeba and Saadian. She has also invited all costars which she had worked with and also her Industry friends.
Tiktoker Zulqarnain and Kanwal Aftab:

Kanwal Aftab and Chaudhary Zulqarnain, the popular TikTok stars of Pakistan, tied the knot last year in a Nikah ceremony. This couple is a vision to behold in these beautiful pictures. Kanwal looked like a Disney princess at her reception, and her groom, Zulqarnain, turned out to be her prince!
Maryam Noor: