Post-Eid, the Ramadan shows have come to an end while other successful, longer-running shows are reaching their conclusion points- and several wrapped up right before Ramadan began .  Therefore, it’s only expected that an influx of new shows will be taking over our television screens in the coming one to two weeks.  While we generally do await new, promising content, viewers are currently overwhelmed with the number of new shows premiering this week.  Here are the shows that made their debut in the week of May 16 – May 22 and let’s discuss how they fared. 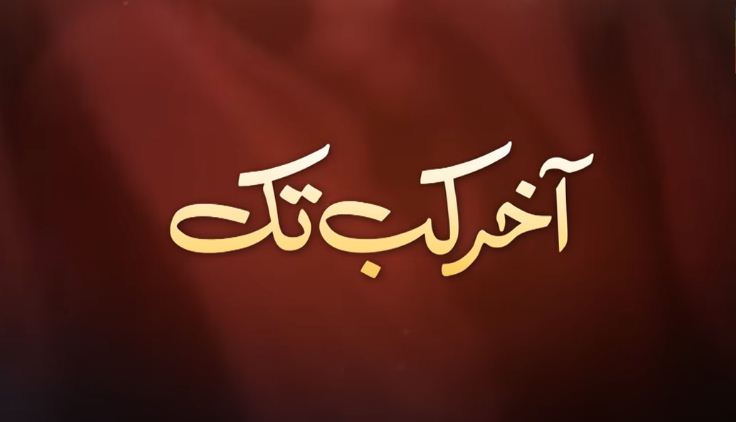 “Aakhir Kab Tak” is one of the more promising new shows, boasting of a stellar cast and a seemingly strong script.  Airing on Sunday nights, “Aakhir Kab Tak” stars Ushna Shah, Srha Asghar, Adeel Hussain, Azfar Rehman, Haroon Shahid, Javeria Abbasi, Gul E Rana, Shahood Alvi and others.  The story has been written by Radain Shah (Khudparast, Shehnai) and directed by Syed Ali Raza Usama (Bashar Momin, Ab Dekh Khuda Kya Karta Hai, Dil E Bereham).  Zeroing in on the lives of two sisters, Fajar and Noor, it’s clear from the onset that Fajar has been on the receiving end of some form of abuse or harassment due to her visible discomfort, uncertainty and fear.  Meanwhile, Noor is the outspoken sister, one who has learned to fight for herself and defend her rights within a conservative, oppressive family system where her mother is mistreated on a daily basis.  This drama appears to highlight the plight of women and will, hopefully, be worth watching.  As of right now, the first episode has taken off on a good note, setting up the story for upcoming episodes. “Yaar Na Bichray” has a good ensemble of actors, has been written by Uzma Iftikhar and Furqan Sahir (Ki Jaana Main Kaun) and directed by Mohsin Talat, who recently directed the brilliant “Saraab.”  Starring Zainab Shabbir in a lead role (for the first time?), Mirza Zain Baig plays her love interest.  The two were seen together in “Malaal E Yaar,” though not paired opposite each other.  The show also stars Hammad Farooqi, Zhalay Sarhadi, Noor Ul Hassan and others in prominent roles.  It wouldn’t be a stretch to say the first episode comes across as a disaster.  The show will see Palwasha (Zainab Shabbir) being forced to marry against her will – but to whom?  Azar (Mirza Zain Baig) is a local goon who runs a shop and falls for Palwasha at first sight.  Little else of value happens in this episode.  The character sketches do not work and, straight away, the actors feel like misfits in their roles.  Zainab Shabbir overacts, Mirza Zain Baig (who is a wonderful actor) looks out of place as a shopkeeper in his over-the-top getup and Hammad Farooqi is a miscast as a “chicchora” troublemaking “ghunda.”  Even a brilliant actor like Noor Ul Hassan seems to be playing a caricature rather than a character.  If the first episode is anything to go by, “Yaar Na Bichray” isn’t anything to get excited about. The theme of “Pardes” focuses on those individuals who leave their loved ones in search of greater (financial) pastures abroad and not only what they go through, but what their loved ones endure back home. “Pardes” stars the brilliant Sarmad Khoosat, Shaista Lodhi, Bushra Ansari, Gohar Rasheed and Sharmeen Ali in prominent roles.  Written by Sarwat Nazir, the show has been directed by Marina Khan.  With this brilliant cast, there are expectations attached – and the show delivers!  Ahsan (Sarmad Khoosat) and Zubeida (Shaista Lodhi) are an in-love couple that are, quite honestly, “couple goals” in how they support one another in every way.  They live with their daughter, Ahsan’s mother (Bushra Ansari), irresponsible brother Asim (Gohar Rasheed), Ahsan’s younger sister and, ultimately, Asim’s new wife Nausheen (Sharmeen Ali).  With a full house relying on Ahsan’s income, Ahsan feels the financial strain.  A job opportunity opens up for Asim in Dubai, but Asim rejects it – leaving the option open to Ahsan.  This story is one that many in South Asian society can relate to and that’s sure to pull in many viewers.  To top it off, Sarmad Khoosat’s acting is alluring from the first episode alone and his chemistry with Shaista Lodhi is naturally appealing.  The treatment and direction gives the drama a natural, realistic feel, which only heightens the quality.  This one is a keeper! “Neeli Zinda Hai” is set apart from others by its theme – a story that seems to have a supernatural angle.  Written by Adeel Razaq and directed by Qasim Ali Mureed, this drama stars Mohib Mirza, Sonia Mishal and Urwa Hocane in lead roles, supported by Shabbir Jan, Mohammad Ahmed, Kinza Malik and others.  The first episode takes off on a high note.  We are introduced to Aman (Mohib Mirza) and Sumbal (Sonia Mishal), a couple who are in an unhealthy place in their marriage.  While Aman has spent the majority of their marriage working in Australia, Sumbal and their mute daughter have been living with Aman’s parents – and Aman’s mother, played by Kinza Malik, has not been kind.  Aman returns to Pakistan permanently and buys a new house for his wife, hoping to repair his relationship with not only his wife, but also his daughter.  Unfortunately, his mother is furious at his abandonment and appears to have negative intentions, which are leaning on the side of black magic.  Visually, the show is stunning to look at and the story is intriguing from the word “go.’  Mohib Mirza and Sonia Mishal act well and are convincing as a troubled young couple.  The first episode isn’t scary, but the end of the episode promises some scares in the future.  “Neeli Zinda Hai” holds tremendous promise if it can keep up with the pace set by the first episode. 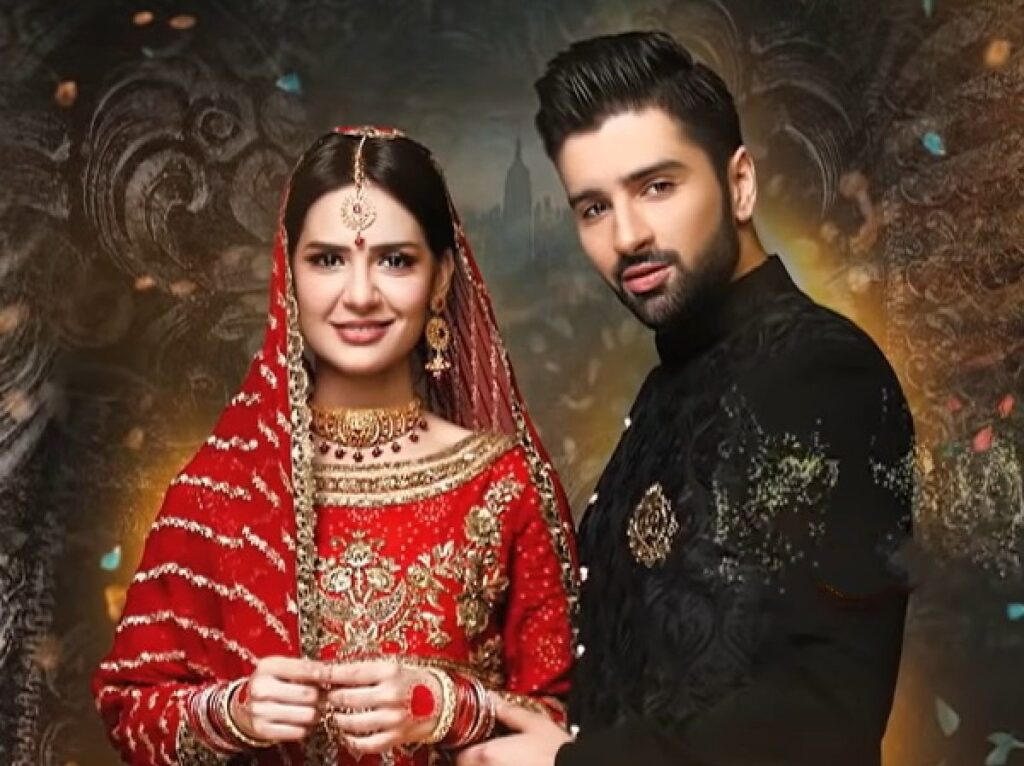 The theme of “Mujhe Vida Kar” revolves around – you guessed it – marriage.  Written by Samra Bukhari and directed by Saqib Zafar Khan, this drama stars Saboor Aly, Madiha Imam, Muneeb Butt, Saba Hameed, Shabbir Jan, Tara Mehmood, Raza Talish, Haaris Waheed Sana Askari and several other talented actors, which should make the show an immediate winner.  Unfortunately, the story is not particularly novel and the characters, barring the female leads and their lovable immediate families, are horribly unlikable.  “Mujhe Vida Kar” is a story about two best friends, Sadia (Saboor Aly) and Rida (Madiha Imam) and their dreams – obviously regarding marriage.  The “feel” of the show is heavy from the very beginning with Sadia’s marriage being arranged to Tauseef and his family making heavy demands for dowry, which forces her brother to sell his bike and use his education funds for her wedding.  This sets Sadia up for a lifetime of misery with a conniving, manipulative, greedy group of in-laws.  On Sadia’s wedding, Rida meets Usman (Muneeb Butt), who falls for her at first sight and the two share a cute flirtation.  But viewers are aware that Usman’s family (Shabbir Jan, Saba Hameed and Maira Khan) is the family from hell after witnessing the way they treat their own son, Azhar, and daughter in-law Farheen (Sana Askari).  Rida may have found her ideal partner, but her marriage will be very difficult.  Overall, this drama is quite difficult to watch due to the miserable in-law situation – and yet, the actors are good enough to keep the viewer interested.  This show may fall into the “guilty pleasure” category, but it’s a bit heavy on the misery quotient.

“Mohlat” has been written by Samira Fazal and directed by Saima Waseem.  This drama has a wonderful cast including Bushra Ansari, Asma Abbas, Sami Khan, Kinza Hashmi, Komal Aziz Kahn, Sabeena Farooq, Javeria Abbasi, Usama Khan, Saife Hassan, Nida Mumtaz and many others.  Without mincing words, “Mohlat” is an embarrassing show about how self-sacrifice will get one absolutely nowhere.  The female “lead” is Nawera (Komal Aziz Khan), a moronic, too sweet, too kind character who behaves like she’s a servant to her elder sister, Rida (Kinza Hashmi).  Rida preys upon Nawera’s sacrificing nature and takes advantage of her at every point.  Rida herself is a selfish girl and strings along not only her cousin Dawar (Sami Khan), who Nawera is also in love with, but also her classmate Salman.  While Rida continues to play her games, it’s clear that the all-sacrificing Nawera will dig her own grave as she continues to cover for Rida.  These sorts of storylines have become outdated and illogical as girls in this day and age do not sacrifice for anyone unnecessarily – and Nawera’s actions are nonsensical.  This sort of show may actually bring in ratings, because people seem to love watching women sacrifice and destroy themselves in the process – but this is not a quality show.  It’s embarrassing to see so many talented names associated with it and, quite honestly, we expect better. 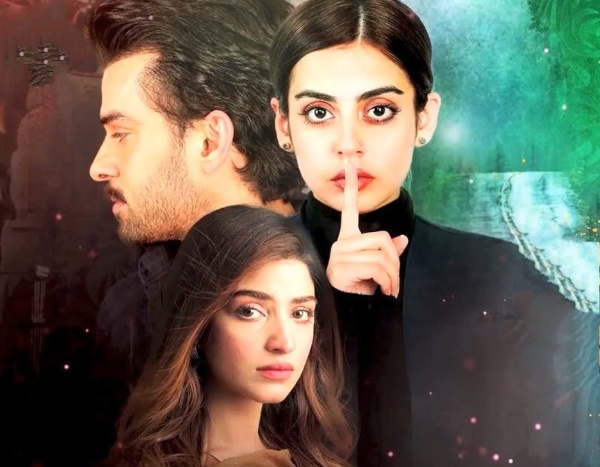 “Azmaish” stars Kinza Hashmi, Fahad Sheikh, Yashma Gill, Minsa Malik, Shahood Alvi, Laila Wasti, Furqan Qureshi, Gul E Rana and others in prominent roles.  The story has been written by Sameena Aijaz and directed by Fajr Raza.  Some stories have become so common that it’s tediously repetitive for viewers, the sister versus sister storyline topping the list.  The story of “Azmaish” is, thankfully, slightly different, enough to still hold viewer interest.  Instead of pitting sister against sister, “Azmaish” focuses on an antagonizing relationship between stepsiblings – and stepparents.  Laila Wasti plays a woman who has married Shahood Alvi’s character and inherited stepdaughters Shaza (Yashma Gill) and Samreen (Minsa Malik), who see her as a villain. The two girls declare open war, creating trouble not only for their stepmother, but mostly for Nimra (Kinza Hashmi), their stepsister.  Yashma Gill’s performance is what stands out the most in the first episode.  She does a good job as a psychologically unstable character.  The weakest link are the roles of the parents, as it’s unclear why these two individuals married each other as neither really likes or has respect for the others children.  One wouldn’t call “Azmaish” bad, but it’s not good either – however, the Basit (Fahad Sheikh) and Nimra angle may be one to hold out for, along with Yashma Gill’s performance.  Also, can we just call out the re-use of the “Mera Naam Yousuf Hai” OST?  Overall, “Azmaish” is an over-the-top watch, but may still be worth it in coming episodes.

“Yun Tau Hai Pyar Bohat,” starring Hira Mani and Affan Waheed, was expected to air this week on Friday, but has rumoredly been put on hold and is expected to replace “Raqeeb Se” after it winds up.

Overall, the majority of the new releases are not too exciting, the theme of “misery” only too evident now that “Chupke Chupke,” “Ishq Jalebi” and “Tanaa Banaa” have ended.  Out of these seven discussed shows, here is the breakdown:

Worth Watching:  The best of the lot are “Neeli Zinda Hai,” “Aakhir Kab Tak” and “Pardes,” each displaying a strong storyline and wonderful acting within the first episode itself.

Discard: “Yaar Na Bichray” and “Mohlat” are shows one is probably better off not tuning in to.

Raqs E Bismil Episode 21: Circumstances Have Taken a Turn For the Repetitive