“Prem Gali” is one of those refreshing shows on television that manages to tell a solid story while keeping the overall feel of the drama light-hearted and natural. There’s enough drama to keep the viewer hooked, while also keeping the realistic appeal in-tact and the show manages to impart some wisdom in a discreet way as well. Starring Farhan Saeed, Sohai Ali Abro, Saba Hameed, Uzma Hassan, Shamim Hilaly, Qavi Khan Waseem Abbas and others, “Prem Gali” has been written by Faiza Iftikhar and directed by Qasim Ali Mureed. 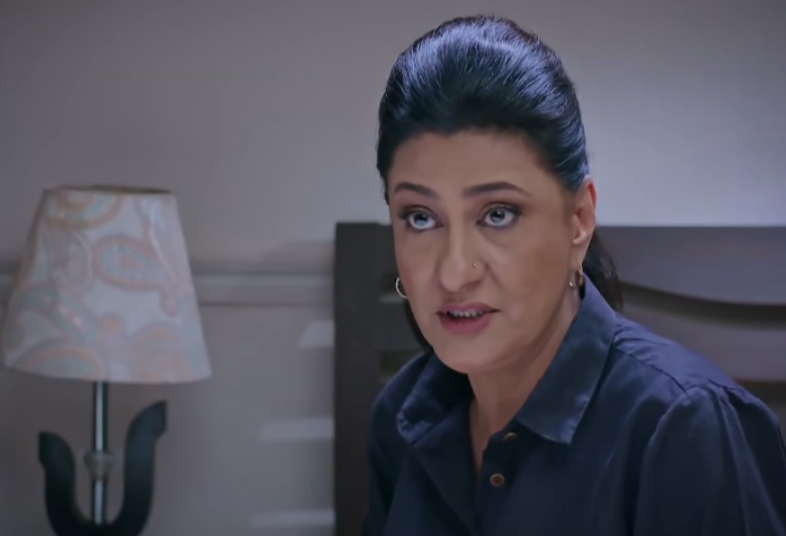 Luqman and Mussarat’s relationship is a highlight of episode 21, though they only share about five minutes together. Mussarat asks Luqman for a favor, asking him to take her clothes to the dye shop. Their discussion on colors is laughter-inducing and while the two seem irritated by each other, it’s also clear that they share a bond due to their loneliness. Mussarat is also drawn to Luqman, made apparent when she changes her mind about having her (pink) clothes dyed when Luqman says pink looks good on her. There’s a beautiful yet sad moment later when Mussarat puts on a pink dupatta, momentarily thinking about Luqman…..and then changing back to black, realizing her dreams may simply remain dreams. Mussarat’s self confidence and belief in love and happiness has been badly shattered, so she doesn’t even believe she’s worthy of it. Luqman is the same, jaded over his two hour long marriage, and feels that everyone around him is unhappy as well, seeing sadness as a red flag in her marriage to Hamza. We can only hope this story receives the attention that it deserves, because it would be wonderful to see these heartbroken characters find their way to happiness.

Shireen (Saba Hameed) continues to be suspicious of Hamza (Farhan Saeed), questioning his job when he brings a car home. This, of course, creates an argument between Hamza and Joya (Sohai Ali Abro) when Hamza vents his frustration over Shireen’s attitude. Later, things become worse when Hamza discovers that Shireen sent Sannata to spy on him and find out where he works. Hamza and Joya get into an argument where both throw out their frustrations at the other’s family for their interference. To be fair, the treatment Hamza receives at the hands of Joya’s family is much more severe than the loving coddling that Joya receives at the hands of her own in-laws. Because of this, the viewer does find themselves siding wholeheartedly with Hamza, who certainly has every right to be frustrated. Another stand-out moment is when Shireen discovers that Hamza works for Manzoor (Javed Sheikh). As the two stand face-to-face years later, their conversation makes it apparent that Manzoor is not the bad man Shireen has always painted him out to be. Rather, he makes it clear that despite always knowing where Joya was and keeping track of her life, he never tried to interfere, because he knew Shireen wouldn’t like it. His heart seems to be in the right place – and this is something Shireen is seen thinking about later on as she questions her own actions and whether the failure of her marriage rests on her own shoulders after all. Saba Hameed’s acting in these scenes is worthy of praise.

Prem Gali Episode 20: Hamza and Joya’s Families Begin To Drive a Wedge Between the Couple

Episode 21 moves the story along, despite some scenes that feel stretched and lagging – and yet there isn’t much room to complain, because those drawn out silences are exactly what drive home the gravity of how Hamza and Joya’s marriage is suffering due to their complicated living conditions. The next episode will take a promising turn as Shireen becomes adamant that Hamza leave his job, “recruiting” Joya to convince him. But it’s clear that Joya and Hamza’s life will take a new direction once Joya begins to realize how much her family – namely Shireen – is beginning to negatively affect her marriage.

Dulhan Episode 15: Sumbal Iqbal’s Amal Stands Up For Herself

Qayamat Episode 1: Ahsan Khan Is In Fine Form As The Uncouth Rashid