An actor by profession and a cricket buff at heart, Pakistani star Fahad Mustafa needs no introduction. Having been a prominent part of the entertainment spectacle for several years now, there is nothing he hasn’t tried his hand at. From venturing into TV production at the start of his career to starring in some of the best films of Pakistani cinema including the likes of Na Maloom Afraad, Load Wedding and Actor in Law to hosting the game show Jeeto Pakistan, Fahad undoubtedly holds a massive fan following. Talking to The Brown Identity, the actor weighed in on the Covid-19 pandemic, his upcoming project Quaid e Azam Zindabad opposite Mahira Khan, social media evils and the future of the TV and film.

Fahad: When the virus first broke out, I was on a tour of Jeeto in Lahore. The Pakistan Super League (PSL) playoffs were going on and I was stuck in a chaotic and populated situation. I remember I used to tell my manager everyday that there is so much work and I need some rest, even if its for 10 days. I was shooting a commercial and working on four big campaigns which had long shoots that required me to dance too, so I was extremely exhausted. Now, when I look back, I feel like I didn’t think it through (no one did!) and I have been resting for four months now!

Fahad: When I did interview-based shows back in the day, I always used to think that there are just a handful of celebrities in this country and how many times can I invite them and ask them the same questions time and again. Since it was a morning show, most of the stars who be half-asleep when they would come and so would I! It became annoying and I realised that I wanted to start another show where I could engage with the general public instead of famous stars because new people would come on the show and there would be new stuff to talk about. Ab toh woh bhi chalay gaye, log bhi nahi bache (Now, those people have also been taken away from me because of Covid *laughs*). I did shoot in the middle after corona broke out but I had no crowd. I thought the show was done and over. Fahad: I was upset that PSL did not finish and I was not over it. So, I somehow wanted to connect cricket with my show. I sat through meetings and brainstormed and then we came up with the idea of doing a league and involve everybody since everyone is at home and they could cheer for their cities. The league became such a big success that I started hating it! I saved a lot of channels by giving them this idea too.

Fahad: I make 10 projects a year. TV is not a book, I’m not your teacher and I’m not here to give a lecture. It’s a misconception that everything must have a message. Its ‘entertainment’! I made Cheekh, Balaa, Muqabil and Aisi Hai Tanhai, all of which became famous and resonated with people in the Middle East, London and America too. People loved them because of their content. You have to cater to all types of audiences. Just because you don’t like it, it doesn’t mean its rubbish. The rubbish they talk about is something else. YouTube does not pay me so I am frankly not bothered about that. What concerns me is when it is aired on channels and I want them to benefit from that. So, how can you say a drama is good or not by looking at YouTube ratings and views? There is nothing such as good or bad.

If you talk about PTV, you’ll remember only 15 to 20 dramas out of its 50 years of history. But where are the rest of the dramas that were all made by legends of that time? So, you see there is not much to look up to. I think we have done a good job in the past 10 years and the credit goes to producers like me, Humayun, Momina and Abdullah because good or bad, we have entertained you and kept the industry going in a good way, whether it’s the drama or film industry. If today, in social media times, the same dramas were there they would have been bashed too. If you shut down Twitter and Instagram for 10 days, everything will become fine. 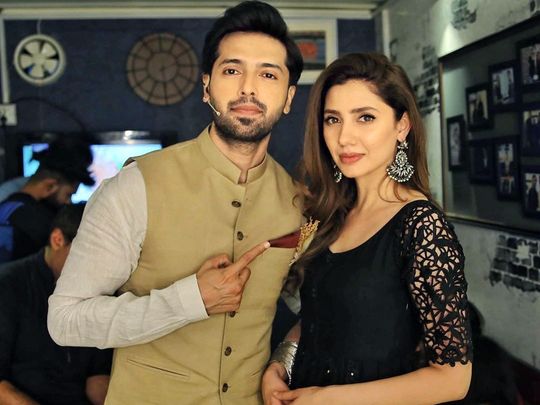 Fahad: There is so much at stake with companies and so much money involved. I just feel like you know how you need a license to drive, so to make a comment you must have some sort of achievement first. Because if I say something bad, I’ll be wrong because I’m important. I’m only on Instagram and Twitter because of my manager. In fact, if you check my Instagram, I have stopped putting up pictures of my family. I think it is also important to come up with good content first if you want to address a particular subject on all these public platforms instead of just talk, talk and talk about making eggs or French toast and stuff that does not make sense. This is why instead of getting annoyed, I moved to the side.

Fahad: This was not the case before. I first used to think that no one abuses me on social media. I didn’t realise I had genuine fans back then. Now it’s in fashion to wake up and troll all the achievers for no reason whatsoever. People want to see violence and want to visualize someone being humiliated and get fun out of it. Such people want to see how we will react. Right now, four big films are coming out including my film Quaid e Azam Zindabad. This is good progress for our country. Every journalist and critic should talk about it and promote it. But instead people are more concerned about who is getting married and what is going on in the private lives of people. Fahad: I can tell you that this year will see some great films. I feel like Pakistan needs such films right now, be it Tich Button, Maula Jutt or Humayun’s London Nahi Jaunga. These are the films that we need because we want to entertain people. We can’t come up with artsy stuff right away and expect our audiences to pay Rs1400 and watch a film which they can easily watch at home. We need to create a cinema-like experience for them that makes them want to come out of their homes, clap, dance and enjoy. This may sound very Bollywood but we have been a Bollywood nation all our lives. It’s in our blood. But with Nabeel, Fizza and me, the best thing is that we try making Bollywood type films because our school of thought has been that. But what we do prefer doing is creating films that is relatable to every Pakistani, be it Na Maloom Afraad, Actor in Law or Load Wedding.

Quaid e Azam Zindabad is a cop film. Be it Tom Cruise, Rajinikanth or Akshay Kumar’s cop films, everyone knows how cop films work. Its just that we haven’t made films like these before. We have never glorified our police for some reason. I was very happy when I saw that policemen who were martyred were celebrated recently. We want to change the image of police and once they also realise that people are looking at them in a different way, they will start to live up to the expectations and serve our country in a better way. I met some bright police officers during shooting. Believe it or not, they are heroes. There is a lot of patriotism in the film. I can assure you there will be lots of goosebumps and nostalgia too but the story will be told through situations, not violence. We had a blast shooting and I had a great time dancing and working with Mahira Khan. I am happy we’re in it together because for me this is one of the biggest films I have done till date.

Fahad:  I’m the only producer who has not starred in my own dramas. I’m making one drama named Dunk but I’m not acting in it because I feel like when my films have done so well on the big screen, then I don’t need to do dramas. I am very involved when it comes to my dramas, whether you talk about shooting sequences or promotions but I am a lazy actor if there are too many sequences. I am on TV anyway because of my show or commercials so I’m not going to act in dramas for now.

Fahad: The drama industry is right on track. Nothing has changed except for shooting days and stuff like that. Its in the right direction. Cinema has been affected greatly because it needs people to get out of the house and watch it. Humayun, Fawad and I, we all had our films releasing this year so that was disappointing. But I feel like people have started valuing work way more and they are now working harder. I hope Covid times end soon and everyone comes out stronger and better!

Movie HookUp: The First Website That Tells Where Movies Are Streaming