Saba Qamar is not just a pretty face but also the heart and soul of the Pakistani film and television industry. She has most certainly made her mark in and has gone to great lengths to prove her mettle time and time again and has definitely carved a niche for herself in the industry. She is known extensively for her work in Pakistani dramas including Baaghi, Daastan and Pani Jaisa Pyaar and her work has also been loved and appreciated across the border in India.

To add to her growing list of achievements, Saba Qamar also launched her very own social media channel this year in the midst of the Coronavirus pandemic, which has been rather successful till date. Saba Qamar has also evolved sartorially and has been taking to her Instagram feed to share all her recent looks and we can decide which one we love the most. Saba Qamar is also not one to hold back if the right thing is not being done and has never feared being outspoken. 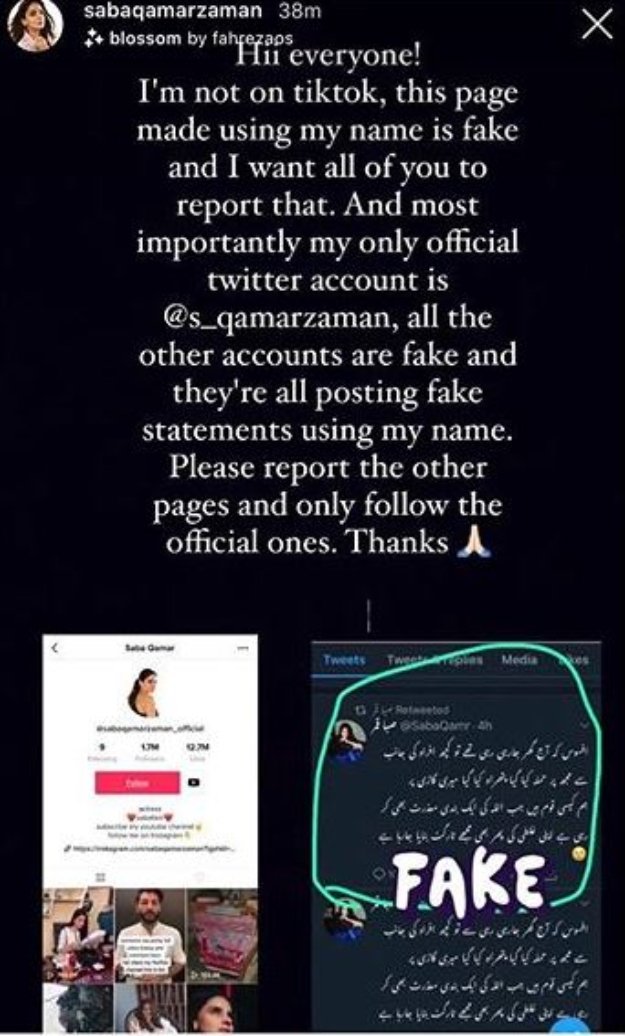 Just recently, Mehwish Hayat called out a TikTok impersonator and now, Saba Qamar is the latest celebrity to do so. Joining the bandwagon, the Baaghi actor took to her Instagram account where she exposed a fake account on TikTok. Taking to her Intstagram, Saba Qamar shared a screenshot of the fake profile exclaiming that the account is fake and not her. “Hi everyone, I’m not on TikTok. This page made using my name is fake and I want all of you to report that,” she wrote.

Saba Qamar dares to bare in her gorgous Eid looks

Just days earlier, actor Mehwish Hayat too called out a number of fake accounts and just like her, Saba Qamar is not one to be taken for a ride. She’s fierce, she’s vocal and you definitely don’t want to get on her wrong side. We can only hope for these fake accounts to be reported and removed before they taint the reputations of our celebrities.