Saba Qamar Starrer Kamli All Set To Premier At International Film Festival Rotterdam 2023 In Europe
The Sarmad Khoosat film will have its first screening internationally.
Kamli came and stole the limelight, all thanks to a powerful performance by none other than Saba Qamar and brilliant direction by Sarmad Khoosat. His wealthy body of work including Manto and not to forget, Joyland(directed by Saim Siddiq) which won major accolades on international platforms are worth mentioning here. His latest offering Kamli was released in cinemas on June 3rd turned out to be a masterpiece and gathered overwhelming praise among the audience. 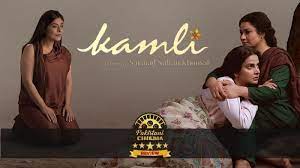 News has that Kamli is all set to make its international debut. Yup you heard that right. Kamli will be screened at the International film festival in Rotterdam, Europe. A femicentric romantic thriller that has already won the audience’s hearts and critics alike with its amazing star cast, brilliant cinematography, and illustrative storyline is all set to rock the international audience in Europe soon.
Khoosat Films announced the development through their Instagram official page. They wrote: “We are so excited to announce that ‘Kamli’ will finally be premiering in Europe at the esteemed International Film Festival Rotterdam ‘23 @iffr, where it has been selected for the Limelight Programme.”We hope the film charms the audiences the way it has left many spellbound in its successful run across packed cinemas in Pakistan.”
For the unversed, Kamli is a movie about love lost and cloaked secrets. KAmli stars Saba Qar, Saia Saeed, Nimra Bucha, Omair Rana, And Hamza Khuwaja in significant roles.