Sajal Aly’s What’s Love Got to With It Trailer is Out Now
The movie is all set to release on January 27th,2023
The wait is over and Sajal Aly’s Hollywood Debut movie “What’s Love Got To Do With It” trailer is out now. After making her strong presence felt in Pakistani drama serials and later a Bollywood movie” Mom” alongside veteran actor Sri Devi, seems like Sajal Aly is unstoppable. Last year actor Sajal Aly was quite in news for signing an international project “What’s Love Got To With It?” in Jemima Goldsmith’s company Instinct Production. 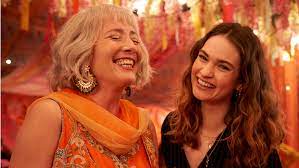 The trailer was just released today and by the looks of it, it is going to be a feel-good light romantic comedy of sorts. Set in the heart of Lahore And London, the movie is based on arranged marriage and relatable shenanigans. Starring Sajal Aly, Lily James, Emma Thompson, Shahzad Latif and Shabana Azmi in a variety of roles, “What’s Love Got To Do With It” will be under the directorial cap of Shekhar Kapoor who will appear after his 2007 Oscar-winning Elizbeth: The Golden Age.
Shahzad Latif who plays Kazim is great friend/neighbours with Zoe played by Lily James. Zoe(A documentary maker) has a string of Mr. Wrongs come into her life all thanks to the dating apps. But when her best friend Kazim reveals his plans of going the arranged marriage way, she goes gung-ho but anyhow starts documenting the whole conundrum of arranged marriage. The first half of the trailer shows Kazim’s interaction with Maymouna(Sajal) and their Love At First Skype. The trailer shows the toxic culture of professional Marriage setups in a rather humorous and relatable manner. 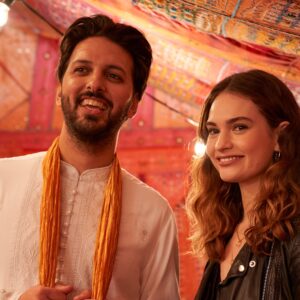 The second half of the trailer show Maymouna (Sajal Aly) and Kazim (Shahzad Latif) getting married in an extravagant Punjabi wedding festivity. Sajal Aly looks gorgeous in her bridal avatar, a shy bride who lets herself lose on her wedding day and dances the night away. As for Zoe, she begins to wonder if she might have something to learn from a profoundly different approach to finding love.
What’s Love Got To Do With It? seems like a beautiful tale of friendships, one-sided romance, arranged-turned-love marriages, and supportive mothers. We can’t wait to see the film already!

Mor Moharan Episode 15: Zahid Ahmed and Sonya Hussyn Are the Stars of This Environment-Based Narrative