Sana Javed And Osman Khalid Butt’s Starrer Kala Doriya Teaser Is Out Now
The incredible star cast is all set to appear on your screens  real soon.
A drama is going to be incredibly entertaining when you know it’s written by ace writer Saima Akram Chaudary and directed by Danish Nawaz. Hum Tum and Chupke Chupke are some of the most entertaining dramas to come on pour television screens to date. Keeping the legacy alive, the dynamic duo is set to grace our television screens with yet another drama serial Kala Doriya.  The teaser of the drama has been released and needless to say, we are in for a visual treat.

Starring Sana Javed and Osman Khalid Butt in the lead roles, Kalaa Doriya is about two families who despise each other and the guy and girl end up falling in love. All hell breaks loose. Will they be able to cross the hurdles thrown their way by family or will they power through to come together as one? Watch Kaala Doriya to find out. Many actors like Farhan Saeed and Ali Rahman were roped in for the lead role that eventually went to Osman Khalid Butt. The drama also Features Shehzad Noor, Farhan Ally Agha, Nadia Afghan, Zainab Qayyum, Tamkinat Mansoor, Khaled Anum, Ali Safina, Samina Ahmed, and others in different roles. 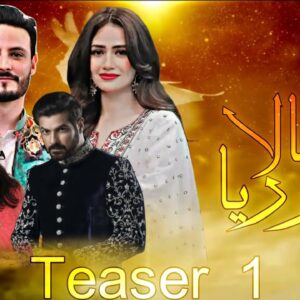 Fans are super excited about the drama serial as it gives very Chupke Chupke and Hum Tum vibes, yet it also has different lead characters, making it all the more interesting. Some keen fans have noticed the similarities sets used for Hum Tum and Kalaa Doriya are similar. While others noticed that the lead actor Sana Javed is copying Ayeza Khan’s acting style from Chupke Chupke’s character. Some fans sigh with relief that the drama didn’t start in the month of Ramzan while others are criticizing Saima Chaudary for writing similar style stories. But overall fans are waiting impatiently for a comedy-drama that comes once in a blue moon.

Nimra Bucha To Star In Pakistani-Canadian Movie Me, My Mom, And Sharmila