Celebrities are being trolled left, right and center. From Hollywood to Bollywood and even the Pakistani entertainment industry, actors often fall prey to crude and insensitive comments on the part of social media users, who might not always mean what they say but just do it for kicks! Flame wars are a part and parcel of their profession and most stars turn a deaf ear or blind eye to anything that is demeaning, humiliating and outright rude in any way. Actor Sheheryar Munawar Siddiqui, however is not someone to be messed with and his latest exchange with a Facebook user is proof. 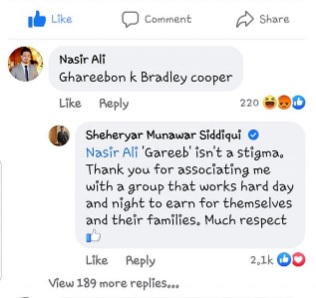 The actor recently uploaded a picture from one of his photoshoots on his official Facebook handle. He can be seen wearing a navy-blue three-piece suit coupled with a floral tie. The star looked dapper to say the least. Many users took to the comments section, with many drawing similarities between him and Hollywood A-lister Bradley Cooper. While it was all in fun and games, there was this one comment that irked Sheheryar and we don’t blame him for it!

A user commented on the post saying, “Ghareebon ka Bradley Cooper”. This did not sit well with Sheheryar who instantly clapped back like a boss. Penning the perfect reply, he wrote, “Ghareeb (poor) isn’t a stigma. Thank you for associating me with a group that works hard day and night to earn for themselves and their families. Much respect.” Well, he was not wrong after all because it is wrong to stereotype the under-privileged because it is not their fault that their lives are harder than their highly-privileged and upper-class counterparts. Sheheryar’s comment serves as a wakeup call for the wealthy to appreciate all the blessings that have been bestowed upon them and to always give back to those in need.