His Highness Sheikh Mohamed bin Zayed Al Nahyan, Crown Prince of Abu Dhabi and Deputy Supreme Commander of the UAE Armed Forces, arrived in London on Thursday for an official visit. He met with Charles, the Prince of Wales as well as UK Prime Minister Boris Johnson. Taking to his official Twitter handle, Sheikh Mohamed wrote, “During my meeting with HRH The Prince of Wales, we spoke about the historic friendship between the UAE and UK and various aspects of cooperation between our two nations.” Expressing his happiness after meeting with Johnson, he added, “We discussed the importance of peace and stability in the Middle East and also strengthening and developing the relationship between our two nations.” 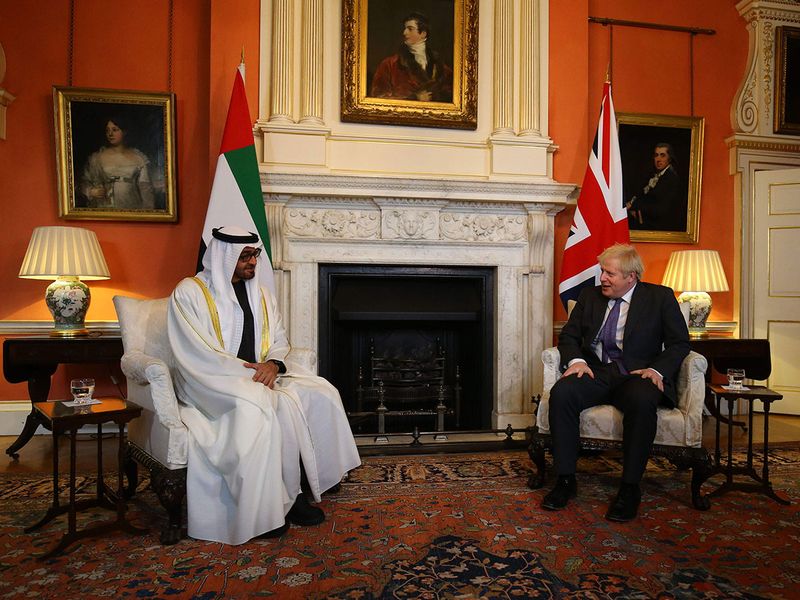 Sheikh Mohamed and Johnson spoke about developing deeper ties between the UAE and UK. He and Prince Charles also discussed the historical ties of friendship and cooperation between the two countries, as well as the ongoing international efforts to contain the impact of Covid-19. They also exchanged views on regional and international developments of mutual interest.

During the meeting, attended by Sheikh Abdullah bin Zayed Al Nahyan, Minister of Foreign Affairs and International Cooperation, Sheikh Mohamed thanked Prince Charles for his warm hospitality. He also conveyed the greetings of the President, His Highness Sheikh Khalifa bin Zayed Al Nahyan to Queen Elizabeth II and to Prince Philip, and his wishes to them for good health. Sheikh Mohamed also highlighted the privileged relations between the UAE and UK, saying the growing bonds between the two are not limited to economic and commercial fields, but extend to cultural and educational domains as well. Prince Charles welcomed Sheikh Mohamed’s visit to the UK with open arms and thanked him for his noble feelings and solidarity with the people of the UK during Covid-19 trying times. The meeting was attended by Mansour Abdullah Balhoul Al Falasi, UAE Ambassador to the UK, and Mohamed Mubarak Al Mazrouei, the Undersecretary of the Crown Prince Court of Abu Dhabi.