With “Sabaat” and “Tadap” coming to an end last week, Pakistani drama viewers waited to see which shows would be replacing the two popular dramas.  Fortunately, the wait was not long with “Chalawa” and “Qarar” starting in their place on Hum TV this week.  With both shows boasting of popular names in the cast and the promos striking interest in viewers, how did the first episodes fare on the first night?  Let’s discuss! “Qarar” is a show that has been promoted as a love triangle that comes with a lot of twists and turns, which is clear simply looking at the cast.  The story has been written by Aliya Bukhari, who most recently wrote Deewar E Shab for Hum TV as well, and the show has been directed by Barkat Siddiki.  “Qarar” stars Sanam Jung, Rabab Hashmi, Muneeb Bhatt, Mekaal Zulfiqar and Ali Safina in lead roles, along with Wasim Abbas and Seemi Pasha.

Episode one opens with a stereotypically filmy scene with Faraaz (Wasim Abbas) bragging about his overly caring, loving, hard-working niece Fariha (Rabab Hashmi) while his wife rolls her eyes, clearly not as loving as her husband.  While Fariha is an ideal daughter, her cousin Maya (Sanam Jung) is a lazy, loud-mouthed, picky and conceited girl who has rejected proposals left and right in search of the perfect, financially loaded man.  Maya’s character introduction is fairly over-the-top and “filmi,” which could have set the tone for the rest of the episode, but instead it manages to be enjoyable.  Rubab is seen as the “good girl” and while working, she ends up getting a ride home with Ammar (Muneeb Bhatt), who is a friend’s family friend.  Ammar sees Maya and falls in love at first sight, deciding to send his grandmother with a proposal.  At the same time, Maya bumps into Salman (Ali Safina), a college classmate who was proposed and was turned down by Maya.  The two reconnect and Salman makes no moves to hide his feelings for Maya, though it’s clear to viewers that Salman is not a straight-and-arrow sort of man.  A relationship with him may spell trouble, though Maya seems to be trouble all on her own.

The story of “Qarar” is not particularly different from other shows we’ve seen, but the treatment and presentation is fresh and manages to pull the viewer in.  It’s also great to see Sanam Jung in a more lively role after “Mein Na Janoo” and it’s nice to see her doing something different.  Rabab Hashmi and Muneeb Bhatt’s chemistry is also something to look forward to as the two look nice together. 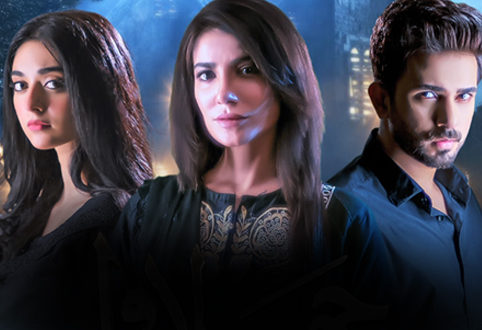 On the other end, “Chalawa” presents an entirely different story, which sets it apart from other shows currently on air.  If one goes in unaware (as I was), it can catch the viewer by surprise to realize this falls into the horror genre.  Starring Naveen Waqar, Noor Khan, Ali Ansari, Samina Ahmed and Adnan Jaffar in prominent roles, the story has been written by Shahid Nizami and directed by Najaf Bilgrami and Shamoon Abbasi.

In episode one, viewers are introduced to Mahnoor (Naveen Waqar), a pregnant woman who has been suffering emotionally and mentally after the death of her husband.  The audience sees, in flashback, the strength of Mahnoor’s relationship with her husband.  Her mother-in-law (Samina Ahmed), who is also her Khala, cares for her.  After Mahnoor falls ill, her psychiatrist refers her to a different doctor in Karachi and advises her Khala that she needs a change of environment as well.  The duo decides to move to Karachi, but Mahnoor is torn over the idea of leaving her husband’s memories behind and goes to visit his grave at night.  This is when the story really picks up – Mahnoor is stopped by the guard, who warns her that it is dangerous to proceed and she will do so at her own risk.  Mahnoor does not leave the graveyard alone.  Later, in Karachi, the household help feels a presence in the house – but this is just the beginning.  Mahnoor goes for a job interview, but when her to-be boss harasses her, Mahnoor slaps him and storms out.  As she walks out, she is approached by the graveyard guard who instructs her to stop doing what she is doing.  A confused Mahnoor asks him what he means, but right then, the harassing boss steps onto the roof and kills himself.  Mahnoor is left shocked.

The first episode of “Chalawa” sets the stage for a much scarier story, as seen in the promos.  Naveen Waqar is an ideal choice for the role of Mahnoor, as she’s an actress that can deliver an array of expressions and play a variety of different roles.  We’ve seen her play intense roles in the past and it’s clear she will deliver here as well.  Be warned though – this show is not for the faint of heart and if you scare easily, this may not be the show for you.  For those looking for something unique and thrilling, give “Chalawa” a chance.

Both “Chalawa” and “Qarar” manage to inspire interest and seem to be different from the usual, run-of-the-mill storylines.  While “Qarar” will hook the viewer interested in dramatics and romance, “Chalawa” is for the audiences that enjoy jump scares and intensely scary storylines.