Ugur Sahin and Ozlem Tureci: Everything To Know About The Masterminds Behind The Pfizer Vaccine

News surrounding the Pfizer vaccine and the fact that its being touted as 90% effective has been making the rounds on the internet since yesterday. While people world over have finally received a tiny ray of hope in the longstanding battle against Covid-19, not many know the real masterminds behind the invention of the vaccine, which is being funded by the American pharmaceutical giant, Pfizer. It is actually the brainchild of a German-based married couple, Ugur Sahin and his wife Ozlem Tureci, the founders of BioNTech. The duo is now being lauded for their hard work towards finding a cure for one of the biggest challenges of the 21st century: the coronavirus pandemic.

Sahin and Tureci are now among the 100 richest Germans, with BioNTech’s value jumping to $21bn (£16bn) since the vaccine gained worldwide recognition. Hailing from modest beginnings, Sahin, the Chief Executive Officer of BioNTech, was born in the Turkish city of Iskenderun and shifted to Germany at the mere age of four. His father was a migrant worker at a Ford factory in Cologne. Tureci, who is the company’s Chief Medical Officer, was born in Germany and is the daughter of a Turkish physician who migrated to the country from Istanbul, reported Sky News. 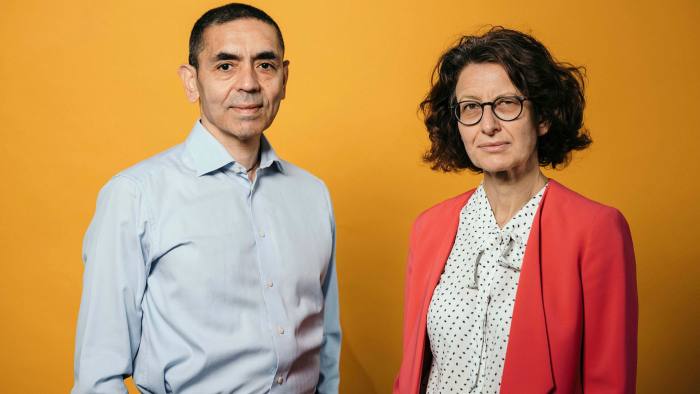 While Sahin trained as a doctor, studying in Cologne and Hamburg, he diverted his focus to researching immunotherapy, eventually meeting his ladylove Tureci in the very early stages of his academic career. The couple’s passion for their work knows no bounds, so much so, that Tureci previously revealed they both took out time for lab work on the day of their wedding. The first company they set up together was Ganymed Pharmaceuticals in 2001. The company was involved in researching the possibility of using modified genetic code, or Messenger RNA (mRNA), to trick the body into fighting cancer and develop cancer-fighting antibodies. They sold this business in 2016 for $1.4b (£1bn).

The two founded BioNTech in 2008, in an attempt to pursue a much broader range of cancer immunotherapy tools. The couple’s work on the potential of mRNA proved to be crucial in the development of the COVID-19 vaccine. In January 2020, Sahin stumbled upon a scientific paper on the coronavirus outbreak in city of Wuhan. BioNTech quickly assigned about 500 staff to project “light speed” to work on several possible compounds, winning pharma giant Pfizer and Chinese drug maker Fosun as partners in March.

Now, multiple trials have shown the vaccine, which uses mRNA genetic material to prompt the body to produce antibodies is 90% effective. Many of Sahin’s colleagues describe him as modest and understated. Matthias Theobald, an oncology professor at Mainz University, where Sahin still teaches, said, “He is a very modest and humble person. Appearances mean little to him. But he wants to create the structures that allow him to realise his visions and that’s where is aspirations are far from modest.” Matthias Kromayer, a board member of venture capital firm MIG AG, whose funds have backed BioNTech, added, “Despite his achievements, he never changed from being incredibly humble and personable.”