Wabaal Featuring Sarah Khan and Talha Chahour Is More Than Just A Love Tale
The 3 teasers released so far are unfolding some truly intriguing storyline.
Earlier this week, the first teaser of the Wabaal drama serial featuring Sarah Khan, Talha Chahour, and Merub Ali was released. Not only the character’s first looks were endearing, the storyline seemed more like a love story. However, the third and very recent teaser that was released yesterday shows a much darker side to the supposed love story. Written by Qaisera Hayat and directed by Amin Iqbal, Wabaal stars a fresh and new on-screen pair Talha and Sarah Khan.

Talha Chahour who has played quite an impactful character in the drama serial Jo Bicharh Gaye is playing the lead in the upcoming serial. Though not much has been revealed about Talha in the first teaser, it shows the character of Sarah Khan as an opportunist, lier, and greedy girl who loves to flaunt her wealthy lifestyle in front of her friends and weaved a web of lies with them. Where her life is full of planned world tours, and gifts that are no less than diamonds and gold sets by her fiancé Faraz played by Talha Chahour. Sarah is engaged to Faraz on her father’s wishes but she doesn’t like him because she wishes to get rid of a life of poverty. In the teaser, it seems like it is just a story of good evil vs. the bad sister.
In the second teaser, Faraz is seen pursuing Sarah Khan but she is reluctant to come halfway for him. Talha claims to bring stars and moon for Sarah while she is seen to play it hard for him. The drama serial also stars Shagufta Ejaz, Merub Ali, Raza Abid, and Saleem Sheikh in the supporting cast. Bunch of talented casts who gets to work in the HUM channel mostly. 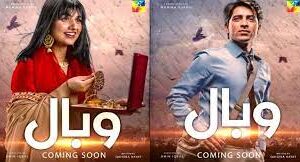 The third and the last teaser give a completely different and show the dark side to otherwise a seemingly love story. A dark side that shows Shagufta Ejaz in a negative character. From the teaser it seems like the couple gets married and later during the hard times, they take some interest-based loan from Shagufta Ejaz which later turns into a nightmare. Looks like Shagufta is up her sleeves to create chaos in their lives.  Good to know that the drama serial is about more than 2 sisters and a guy.
The Drama serial Wabaal is going to start soon on the HUM channel. We wish the whole team of Wabaal the best of luck for their upcoming drama serial.    Can a person’s own malicious thoughts cause them to be destructive not only for others but for themselves as well? Watch Wabaal find out.