“Wehem” Comes To an End, Establishing It As One of the Best Shows of 2022

When “Wehem” first began, it stood out for many reasons.  The first being its unique storyline, focusing on family drama mixed with mystery and intrigue.  Second, the narrative follows a thriller format of sorts.  Third, the main lead concept is flipped, the “older” generation leading, specifically Savera Nadeem, Babar Ali, Shamim Hilaly and Tara Mehmood, relegating the younger actors to being secondary players.  And while “Wehem” may have lagged for a 2-3 episode period, it has maintained quality throughout its run, the finale neatly bringing the story to a satisfactory close.  Is it perfect?  No, however it does leave the audience feeling happy without any nagging loopholes.  “Wehem” stars Savera Nadeem, Babar Ali, Shamim Hilaly, Kinza Hashmi, Adnan Samad Khan, Zaviyar Nauman Ejaz, Tara Mehmood and others.  The story has been written by Imran Nazir and directed by Adnan Wai Qureshi. 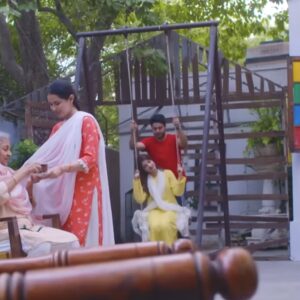 In the finale, Fareed (Adnan Samad Khan) now has Khawar’s (Babar Ali) entire house and property to himself – and makes himself right at home.  The lure of power is strong and it’s interesting to see how someone like Fareed, who has never had anything in his life, including a job or even an identity, has allowed the idea of a wealthy father to consume him.  He has found his “place” and that place is one of power, power he has never experienced before….and power can create a monster.  While Khawar is “the bad guy,” it’s great to see him slap Fareed and put him in his place, bringing him down to a place of reality.  And yet, this slap is exactly what brings Fareed back to reality….and back to Rukhsana.  Would Khawar have ever done this to Eeshal (KInza Hashmi)?  Certainly not and Fareed is aware of this – and it only highlights the bias and difference in love Khawar feels towards the child he can claim versus the one he chooses not to claim. 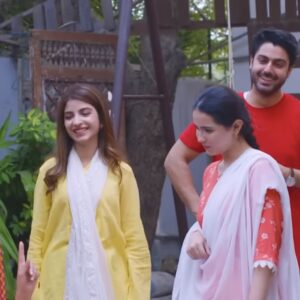 Meanwhile, Rukhsana (Savera Nadeem) has found her happy place surrounded by those she loves.  With Junaid (Zaviyar Nauman Ejaz), Eeshal and Amma Bi (Shamim Hilaly) back at home with her, her conscience and name has finally been cleared.  The stigma she has carried for years and the sins she has hidden from the world are no longer a secret, no longer her burden to carry, and this has washed over her as a wave of relief.  There are beautiful moments shared between the family, particularly once Fareed repents and returns home.  It’s a grim reality that Rukhsana did play mind-games with Amma Bi’s food, but the way both Eeshal and Amma Bi handle this reality is very sweet and empathetic. 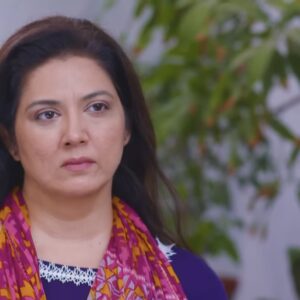 “Wehem” doesn’t paint a picture of a perfect happy ending, but the family does come back together and recognize their happiness lies within their togetherness.  Meanwhile, Rukhsana does forgive Khawar for the sake of her family and, ultimately, for the sake of her sanity.  Khawar does not get what dramas usually depict, which is “easy forgiveness.”  Rather, he has lost his respect and trust in the family and that’s a burden he will always carry.  Still, it’s great to see him reunite with his wife (Tara Mehmood) and attempt to live his life differently moving forward.

There’s so much to discuss regarding “Wehem.”  Babar Ali has been the perfect “bad guy,” a villain who has really just been a flawed human being.  He has lied and then gotten caught up in a lie, a lie which has caused him to continue to lie throughout the course of his life.  These lies have piled up and turned him into a man of poor character and this story has depicted just how easy it is for an individual to get caught up in their own deceptions.  Meanwhile, Rukhsana may not have been the saintly heroine we’re used to.  She has done things to cover her own tracks, save her own character and has fought back profusely against Khawar through his daughter.  She hasn’t been a nice person.  And yet, the narrative highlights a fact that is definitely true of South Asian society; it may take a man and a woman to commit a mistake, but women are the ones who are demonized by that same society while men tend to get off without much damage. 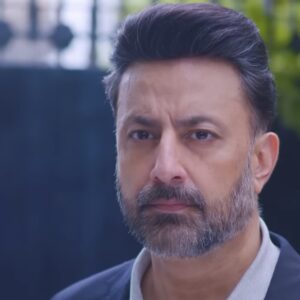 Now let’s discuss the flaws.  Are there flaws?  If we want to call them flaws, certainly.  There are aspects of the story that could have been delved into with more clarity.  Rukhsana’s past story with Khawar could’ve been explored and explained with more detail.  When was Fareed born?  Where did he stay for two years?  How did Rukhsana wind up married to Anwar?  Where was Fareed when Rukhsana went back to adopt him?  We know Fareed was with a friend of Rukhsana’s, but how was this friend able to keep Fareed for so long?  Under what circumstances did she keep him?  These are questions that should have been answered.  Does the story fall flat without these answers?  No.  Therefore, these points aren’t necessarily flaws, rather they are aspects of the story that would’ve made the story stronger had they been discussed in detail.  And yet, we can move past it and accept the story for what it is regardless.

Overall, “Wehem” belongs to its senior cast.  The younger cast does a commendable job, particularly Adnan Samad Khan, Hurriya Mansoor, Kinza Hashmi and Zaviyaar Nauman Ejaz, all giving their best to their respective roles.  However, it’s Savera Nadeem, Babar Ali and Shamim Hilaly who emerge as the stars of the show.  Savera Nadeem, in particular, deserves a round of applause for her portrayal of a strong woman caught in terrible circumstances, living out her life for her children while trying to protect herself from the man who abandoned her.  What an incredible actress she is and she deserves many more central roles like this.  Babar Ali is wonderful, as discussed above.  Khawar is not an easy role to play and his slow reveal has been done very nicely.  Shamim Hilaly is a treat to watch as Amma Bi, an old woman set in her ways who realizes the value of her daughter-in-law later in life.  All three of these actors deserve a round of applause.  “Wehem” can only be called a criminally underrated, quality, class show which deserved more views and attention than it received.

Saba Qamar, Mikaal Zulfiqar Shine In the “Fraud” Finale – Which Wraps Up Too Neatly