Urwa Hocane’s New character Dania In Drama Serial “Meri Shahzadi Diana” Reportedly Based On Princess Diana
Urwa plays the role of a philanthropist and political leader just like Princess Diana.
Urwa Hocane is returning to our television screens after a long time. She last appeared in the drama serial Badzaat alongside Imran Ashraf and Ali Abbas on the Geo television network. News has it that Urwa Hocane is all set to appear in the drama serial “Meri Shahzadi Diana” which is penned by Pyar Ke Sadqay writer Zanjabeel Asim Shah and directed by the ace director Qasim Ali Mureed. 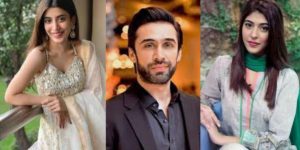 Reportedly, the “Meri Shahzadi Diana” drama serial is heavily influenced by the late British royal Princess Diana whose glamorous yet tragic life is also reflected in this serial. The drama serial is going to be all about tragedy, anguish, and struggles that Princess Diana goes through which will be our very own Udaari fame star Urwa Hocane. The drama will portray her growing years to when tragedy struck in the royal family. Urwa Hocane shares a little teaser on her Instagram and shares “The story of Dania raised by her grandfather – a dedicated admirer of monarchies, treats his granddaughter like a princess. Will Dania also face the same trials, tribulations, and difficulties that come with a life of royalty?”
The drama serial includes a star cast of Ali Rahman, Muhammad Qavi Khan, Atiqa Odho, Shamim Hilaly, Shabbir Jan, Nauman Masood, Najiba Faiz, and others. in times like these when we need women empowerment more than ever, Meri Shehzadi Diana will come as a breath of fresh air and we hope to see Urwa Hocane acing the role because it is one challenging role to play as a challenging life princess Diana had.