Why Team Legend Of Maula Jatt Is Not Promoting The Film Conventionally
Actor Humima Malik reveals the reason for not aggressively promoting the movie.
We have recently seen how movies like London NAhi Jaonga and Quaid-e- Azam Zindabad and Parde Mein Rahne Do had massive promotional activities. The actor went about everywhere in malls, in various programs, in interviews and so much so on trucks around the city. Next, the big release is The Legend Of Maula Jatt which Is just weeks away. Now while audiences are eagerly waiting for the magnum opus The Legend Of Maula Jatt, the promotional activities are almost negligent which honestly looks very dry and boring.
The fans saw some amazing posters starring all the characters of the movie and they loved every bit of it. We could see some glimmer of hope when the two main actors Fawad Khan and Hamza Ali Abbasi came in tv show Mazzaqarat and had some meetups here and there for screening but full fledge promotions are still missing. Yesterday they promoted their movie for an Australian newspaper Sada-E-Watan in which we could see Hamza, Fawad, and Mahira Khan promoting their movie. 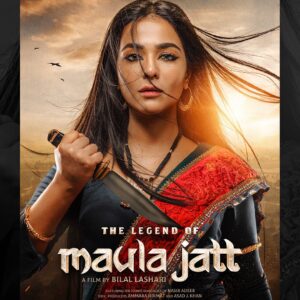 Now why the team of The Legend Of Maula Jatt is not doing any promotional activities is spelled out by the actor Humaima Malik in an interview. The interviewer asked Humaima who is playing vivacious Daro in the movie, about the lack of aggressive promotions of the movie to which she replied “see we cannot go to malls and performance on songs though I don’t have any apprehensions if movie makers are opting for such marketing tactics. She also said that they have a great project in hand and flashy promotions are thus not needed when your product is good.” She also urged everyone to come to watch the movie in cinemas.
Can’t wait for the movie as its released on the 13th of October. We wish the entire cast and crew of The Legend Of Maula Jatt the best of luck and may their movie break all records.

Hocus Pocus 2 Is Just What You Need for Halloween