5 Telefilms That Will Leave You Glued To Your TV Screens All 3 Days Of Eid-Ul- Fitr
Eid-Ul-Fitr aka Meethi Eid is here and we wish everyone an Eid Mubarak. After the great success of Ramzan dramas like Hum Tum, Chaudhary and Sons, and Paristan, the Pakistani drama industry is all geared up to release highly anticipated Eid-ul-Fitr telefilms. All the major television channels have sorted out your entertainment vows by releasing more than 7 telefilms this Eid.  Over the past few years, Eid telefilms have picked up where writers have delved and played with rom-coms, dramas, thrillers, and multiple LOL moments.
So, we shortlisted 5 telefilms that you can watch on Eid-ul-Fitr in the comfort of your home and sheer khorma.
Mast Mohabbat 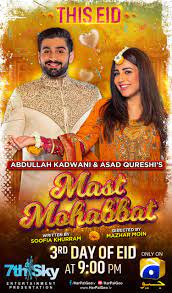 Featuring Muneeb Butt and Ushna Shah in the lead roles, Must Mohabbat is a highly anticipated telefilm. Presented to you by Geo Channel and 7th Sky Entertainment, Mast Mohabbat is a rib-tickling and fun-filled roller coaster ride of drama romance, and comedy. The story revolves around Hina Dilpazeer’s household who wants to marry her filmy granddaughter (Ushna Shah) with her only grandson Muneeb butt who has just returned from abroad after finishing his studies. Will she wish to be successful? Will the apposites attract and they will eventually fall in love and get married? You’ll have to find out on Eid day 3 at 9 pm only on Geo Entertainment!
Love Life Ka Law

The first day of Eid-Ul-Fitr starts with real-life couple Asad Siddiqi and Zara Noor Abbas starrer Love Life Ka Law. Produced by Abdulah Khadwani and Asad Qureshi, Love Life Ka Law is about two lawyers Asad Siddiqi and Zara Noor Abbas, who are past lovers and professionally meet to help their clients win a divorce case. Agha Ali and Sidra Niazi also are part of the telefilm and will be seen as the clients going through divorce proceedings. Amidst the chaotic environment, will Zara Noor and Asad Siddiqi fall in love all over again? We will have to find out on the first day of Eid at 9 pm on Geo Channel.
Bhaagam Bhaag 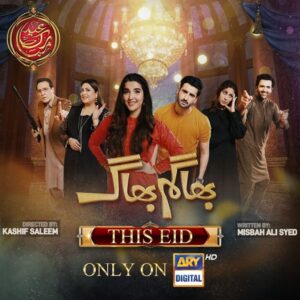 Presented by the ARY channel, Bhaagam Bhaag features Hareem Farooq and Agha Ali as the lead pair for the very first time. Bhaagam Bhaag is about two mismatched people who are meant to be together but are way different than each other. An Eid telefilm with lots of comedy and romance includes Nausheen Shah, Javaid Sheikh, and Fazila Qazi in the supporting roles as well.
Siwaiyaan 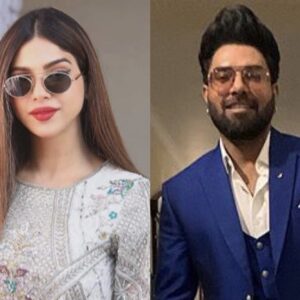 Sonya Hussyn and Yasir Hussain are coming together in Siwaiyyan, a Big Bang Productions, and is a full-on entertainment crime thriller with some great chemistry between the leads who play young wedded who find themselves in a fix. The couple wants to inform their family about their divorce (though the fam is expecting good news), and there is also a murder mystery running parallel to their story. So how things roll and wrap in this situational crime comedy is the USP of Siwaiyyan.
Kaanpein Tang Rahi Hain “Paristan” Has Some Plus Points, But Is Overall a Disappointing Watch