After his whirlwind affair with actor Sajal Aly, Feroze Khan went on to marry Alizay Sultan Khan in the year 2018. Needless to say, the wedding became the talk of the town for a while but unfortunately, the marriage couldn’t last long and ended after four years.  Following the divorce, Alizay Sultan Khan has come forward and broke the silence on her separation, unraveling the reason behind her divorce and legal battles with Feroze Khan over child custody in a very public manner. She writes “Our marriage of four years was utter chaos. In addition to continuous physical and psychological violence during this period, I had to endure infidelity, blackmail, and degradation at my husband’s hands. After careful consideration, I have reached the sad conclusion that I cannot spend my whole life in this horrific manner. 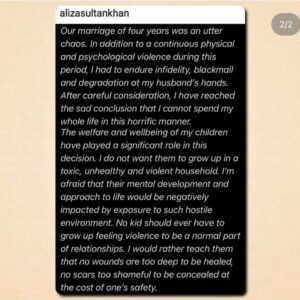 “The welfare and well-being of my children have played a significant role in this decision. I do not want them to grow up in a toxic, unhealthy, and violent household. I’m afraid that their mental development and approach to life would be negatively impacted by exposure to a such hostile environment. No kid should ever have to grow up feeling violence to be a normal part of relationships. I would rather teach them that no wounds are too deep to be healed, no scars too shameful to be concealed at the cost of one’s safety”.
The audience has mixed reviews regarding the divorce and many are of the opinion that just like in dramas, Feroze Khan has played a role of a toxic husband in real life as well.

The “Aitebaar” Finale Wraps Up In a Satisfying, Happy Way – If Not Too Neat