Andhaghaaram: Every Frame A Work Of Art

It is very rare to come across a film in India which doesn’t have a single superfluous moment or irrelevant frame in its length and breadth. In spite of almost 3 hours of playing-time Andhaghaaram manages that near-impossible feat. It is an amazing story told by a master storyteller with the skills and craft that only the most accomplished director can boast of. It comes as a complete surprise to know this is V. Vignarajan’s first film. After watching it twice-over, I want to probe this director’s mind. How did he think of crafting this astounding drama where the horror and dread are welded into the sounds and sights of everyday life, where three men, coincidentally (?) from three different generations, come together in a collective clasp of supernaturalism on ways that no one could ever predict?

This is the kind of rare cinema where one has no idea about the next move, unless they have seen it already. Even during a second viewing , I was taken aback by some of Vignarajan’s visual imagery, a drop of blood, a toothbrush in a cup, a green empty bottle chasing a blind man, the way the director uses a dark room with a bright red landline phone or a rickety movie theatre to generate a sepulchral aura… all these constitute a marvel of cinematic creation. 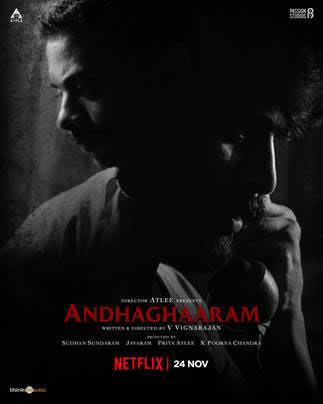 The spoken language and the tone in which the characters speak to one another that goes from a whispered warning to a muffled scream, are further evidence of the director of tremendous visual and emotional adroitness. As the stressful situations open up, there is much stress on visual detailing (God, after all, lies in the details and never mind if Tolstoy’s novel The Devil plays a pivotal part in this drama of dread), so much so that I wondered which came first in the writer-director’s head: the visual imagery or the devastating plot.

There is a supremely smooth simultaneity with which the narrative moves across the three enormously troubled protagonists’ lives without ruffling up the feathers of this rare bird called Andhaghaaram. There is a blind young desperately poor librarian Selvam (Vinoth Kishan) with the face of Sufi saint who communicates with the dead. Then there is Vinod (Arjun Das) who’s losing his mind as the landline phone in his one-room apartment issues him chilling threats in a voice straight out of hell. Finally, there is a traumatized psychiatrist played by Kumar Natarajan who has his own plans for all the mentally distraught heroes of the world.

The narrative glides across these god forsaken lives splashing in puddles of anxiety negotiating stumbling blocks with an unassuming audacity. The film has a stunning look and a beating heart that never stops pumping up the adrenaline. For me, it all came a little undone at the end. I must confess I enjoyed the film more during its journey into the heart of darkness rather than its denouement. In trying to solve too many puzzles, in trying to tie up all the loose ends, much of the mystique and the sense of dread are lost.

Nonetheless, what I came away with is one of the most remarkable suspense thrillers in Indian cinema with a sound design (Alagiakoothan) and cinematography (A M Edwin Sakay) that create a poetry of a tormented bird in flight fluttering its wings against the windowpane of life. I confess I am impressed deeply, and not the least of it is the actors whom I had never seen before. All I saw was not actors aiming to give award-winning performances but a bunch of really troubled people trying to behave normally in a world where nothing makes sense if you sit down to think about it. Meditative, melancholic, mysterious and moving Andhaghaaram is one of the most remarkable cinematic achievements in recent times.