Dubai’s Unique World Records That Will Probably Blow Your Mind
From World’s deepest pool, Dive Dubai to the longest driverless metro network, check out some of the mind-boggling records that Dubai holds.
Fun fact: Dubai holds almost 40 world records to its name. Yup, that’s right! The tallest, biggest, largest, and deepest!! Dubai is inundated with all the superlative world records. Open any social media app in the morning and the first thing you would probably see will be a new world record held by Dubai peeking through your mobile screens. And there seems to be no end to appetite for global acclaim any time soon. The World’s greatest show Expo 2020 is a witness to the said claim.
The Brown Identity decides to take a closer look at some of the fascinating world records that the City Of superlatives has bagged. Here are some of them.
World’s Tallest Hotel- The Gevora Hotel: With Gevora Hotel on Sheikh Zayed road, the status of the tallest skyscraper record got reinforced. The 75 storey Gevora Hotel is the tallest in the world measuring 356.33 m from the ground up and some heads to the clouds. And guess what? It’s got a whopping 528 hotel rooms inside.
The World’s Deepest Dive Pool-The Deep Dive, Dubai 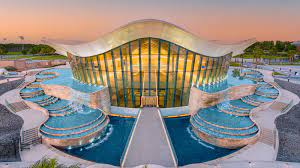 From Will Smiths trying it out for the first time to getting verified by the Guinness Book of world record as the world’s deepest dive pool, with Deep Dive Dubai, Dubai has yet again outdone itself. The oyster-shaped pool (which is a reminder of their UAE pearl diving heritage) has an impressive depth of 60 meters and holds 14 million liters of water beating Poland’s DeepSpot which is 147 feet deep.
World’s Highest Outdoor Infinity Pool-Address Beach Resort Dubai has become a new home to world’s highest infinity pool quite recently. The Address Beach Resort, one of the latest additions to the Dubai skyline infinity pool sits on the hotel’s 77th floor. The massive pool is about 311 feet long and 54 feet wide most double the amount of an Olympic-sized pool.
World’s Largest Picture Frame

The Dubai Frame is an architectural landmark in Zabeel Park, Dubai. It holds the record for the largest frame in the world. Whilst described by The Guardian newspaper as “the biggest picture frame on the planet. Dubai Frame is an iconic structure that ‘frames’ impressive views of Old and New Dubai, while serving as a metaphorical bridge connecting the emirate’s rich past with its magnificent present. Yup, you read that right! Our very own and much-loved Metro Dubai redline which runs like an artery through the heart of Dubai is the world’s longest driverless metro network on earth. In all of Dubai’s 49-station, the 46-mile metro is completely automated and driverless and is getting longer by the day.
World’s Longest Urban Zipline

Soar through canyons and soak in spectacular views while flying through the world’s longest zip line. The RAK zip line offers a course of seven zip-lines, covering a total distance of 5km, connected by nine platforms. Fly at a speed of up to 60 km to reach the 15-meter long sky bridge.
World’s Largest Vertical Maze The largest vertical maze, with a surface area of 3,947.22 m2, is located on the façade of the Al Rostamani Maze Tower.
Largest OLED Screen
The Dubai Aquarium & Underwater Zoo at Dubai Mall is home to a massive OLED display that’s the world’s largest. It measures 709.69 m²!!! Fun Fact: The same display holds two other world records; the largest high-definition video wall and the highest quality video wall.
The Tallest Burj Khalifa And Much More Rang Mahal Episode 89: Rayed Aims For a Reunion With Mahapara – But Do We Want it?

Aakhir Kab Tak Episode 21: Noor Makes Plans For the Future – But Will Her Present Allow It?