Every time a PSL anthem releases, Twitter users have more to say than anyone else! Titled Groove Mera, the song is a collaboration between Naseebo Lal, Aima Baig and Young Stunners. The recently released single did not sit well with social media users on the micro-blogging platform, who felt there were a lot of glitches in the track, from the production to incomprehensible words and questionable lyrics. The song has been produced by former EP front man Xulfi and Adnan Dhool. Rib-tickling memes have taken over the internet since Groove Mera dropped earlier this week. Here is what the internet thinks: 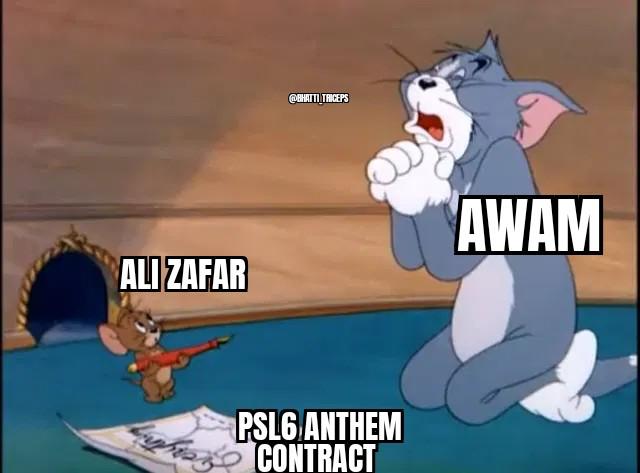 Many users drew the conclusion that singer Ali Zafar could have done a better job at crooning the official song. Tagging the Channo singer in a tweet, a user wrote, “Last hope for PSL anthem. Bhai Ab Hazir Ho He Jao,” throwing shade at Zafar’s response to last year’s PSL anthem, Tayyar Hain. The user uploaded an image of Zafar in the post too. A similar post read, “Hence proven that no one can beat Ali Zafar’s PSL anthem.” The fan was referring to Zafar’s Dil Se Jaan Laga De. Another penned, “Ali Zafar’s reaction after watching memes against #psl6anthem is ‘Bhai Hazir Hai’.” One more tweet read, “Ali bhai jaldi aa jayein.” Another user posted an image of Hulk jumping on a big pair of speakers and captioned it, “People’s reaction after listening to #psl6anthem.” Others questioned what the Groove Mera singers were thinking. “What is Groove Groove? The whole nation wants to know,” asked a user. One even posted drawing of a boy whose ears can be seen bleeding and wrote, “Me after listening to PSL6 anthem by #naseebolal.” While the artists have been receiving ample backlash for their song, actor Mehwish Hayat was quick to shut down trolls this morning. Taking to Twitter, she wrote, “I don’t know what the fuss is about. I loved the new anthem. This bashing has to stop. We need a diversity of voices and ideas. Well done PSL!”