Watching the promos of “Kuch Ankahi,” it was clear that while the show promised some laughs and a light-hearted canvas, there would be strong, story-backed narratives packed within this drama.  With episode two, those storylines are now slowly unfolding, casting light on the struggles faced by the characters we were introduced to in episode one.   Starring Sajal Aly, Bilal Abbas Khan, Mira Seti, Mohammed Ahmed, Irsa Ghazal, Vaneeza Ahmed, Babar Ali, Adnan Samad Khan, Sheheryar Munawar, Asma Abbas, Ali Safina, Qudsia Ali and others, the show has been written by Mohammed Ahmed himself and directed by Nadeem Baig.

While in episode one, viewers were captivated by the show’s light-hearted feel, earthy-toned presentation and drama-meets-comedy story, more of the drama aspect seeps into episode two.  Salman (Bilal Abbas Khan) and Aaliyah (Sajal Aly) continue to bicker as real estate agents trying to win over clients in a saturated profession.  While Salman technically got the deal from Sehrish, Aaliyah offers a deal to give here 1% of the profit – otherwise she will forget their promise to avoid one another.  The deal she offers is ridiculous in itself, as she isn’t working for it.  While Aaliyah can be seen as an irritating character, we are let in to her inner workings with this episode.  Her life doesn’t simply revolve around a mother desperate for her daughters to get married or striving for independence, rather Aaliyah has never had a choice in the matter, being the sole breadwinner for here family.  Aaliyah faces a lot of stress and has had to become strong from a young age – and right now, she is desperate to buy back her father’s home.  Sajal Aly is as endearing as ever in this role, a delight to watch on screen in a role that requires her to be a lot of things – but soft is not one of those things (as of right now). 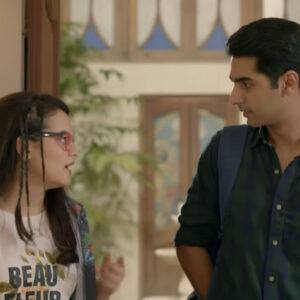 Meanwhile, Salman is a hardworking young man who plays by the rules and believes in playing fair, which is why he is unable to get along with Aaliyah.  However, as straightforward as he may be, someone in his company is giving tips to Aaliyah, ruining Salman’s hard work.  Who is it?  Could it possibly be Salman’s friend – and co-worker?  Salman and his mother’s relationship is really sweet and it’s great to watch an open, honest, loving son-mother relationship on screen as opposed to the toxic mama’s boy relationships we see so often.  Bilal Abbas Khan is very sweet in his role so far.

The scenes with Agha Jaan (Mohammed Ahmed) heartbreakingly depict the plight of fathers without sons in Pakistan.  While women may be educating themselves and progressing, when will our culture and our law recognize that women can also inherit property and also have a claim over the belongings of their own parents?  Agha Jaan’s family has descended like vultures, fighting legal cases against him for property.  Adding salt to his wound and alarm to the proceedings is the fact that Agha Jaan has already sold his wife’s jewelry to pay off one sibling for his share – and yet, he is also demanding his “share” of the property.  This moment emphasizes the importance of documentation in all matters of finances and property.  Does Agha Jaan have any proof that he has already given his brother his share?  Unfortunately, he does not, which leaves him in a very vulnerable spot.  Mohammed Ahmed is always believable in roles like these and does justice to them. 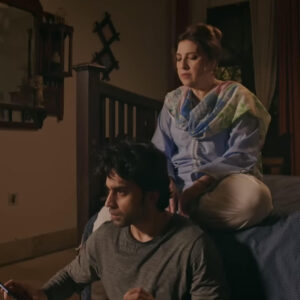 What’s interesting is to see how Sehrish and her father, a different family unit, are incredibly wealthy in comparison to both Aaliyah and Salman’s family units.  However, happiness isn’t in their lives either.  While they may have additional money to throw around and spend freely, their family relationships are fractured – while both Salman and Aaliyah have strong family relationships, but are lacking for money.  This is a great depiction of “the grass is greener on the other side.”

Overall, “Kuch Ankahi” is making an impact with this slow-building narrative.  We can now see how Salman will wind up in Aaliyah’s home, becoming a thorn in her side.  Both Sajal and Bilal share great chemistry as co-stars, but the ensemble cast is equally praiseworthy in this episode, particularly Qudsia Ali, Mira Sethi, Mohammed Ahmed and Annie Zaidi.  “Kuch Ankahi” a quality show so far and we can only hope it continues to play out in this manner with each episode going from strength to strength.

Mere Ban Jao Episode 2 Review: Has Kinza Hashmi’s Azmia Put Too Much Faith In Her Relationship?

Wahaj Ali and Yumna Zaidi Are The Stars Of “Tere Bin,” Holding It Together