It’s definitely one to watch out for.

The dynamic duo Wahaj Ali and Yumna Zaidi are all set to appear in a new drama serial on your television screen. We have already witnessed their magical chemistry in the drama serial Dil Na Umeed To Nahi which was aired on Tv One channel in the year 2021. Recently Yumna Zaidi is seen playing a challenging role in the drama serial Bakhtawar. While for actor Wahaj Ali, the drama will be his second as his drama serial Mujhe Pyar Hua Tha alongside Human Aamir is already being aired on ARY digital network.

From the teasers, it looks like the drama is about the union of an enraged kingpin Murtasim (played by Wahaj Ali), and a very prideful and resilient Meerub (played by Yumna Zaidi) and ensuing passion and rage. The sizzling chemistry is evident from it which compels the audience to watch out for the drama serial. Although a certain section of the audience thinks that Geo Network is churning drama one after another but with the same storyline. The glorification of toxic men and how this character will not suit actor Wahaj Ali. Other says that these are cliché Siraj Ul Haq dramas. 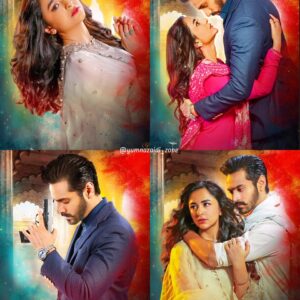 To date, 3 teasers have come up for this drama. Earlier the name was suggested to be Tere Bina but now looks like it will be named differently. The upcoming drama is the 7th Sky Entertainment production. The cast of the drama includes Yumna Zaidi, Wahaj Ali, Bushra Ansari, Farhan Ali Agha, Sabeena Farooqi, and Fazila Qazi. The drama will feature the amazing love story of Yumna Zaidi and Wahaj Ali. The director of the drama is Siraj Ul Haq and it has been written by Nooran Makhdoom.