While the social media world may appear flamboyant, it is not all glitz and glamour. It comes with its fair share of highs and lows for celebrities around the world. There is no denying that platforms such as Facebook, Twitter and Instagram help stars to gain traction on the professional front but the dark side lies in the intrusion of their private spaces, ridiculous rumours doing the rounds and never-ending trolls attacking the best of them. Pakistani A-lister Yasir Hussain is one such example. The actor – who has fallen prey to internet gnomes time and again – remains unfettered by all the negativity. Talking to The Brown Identity in a recent interview, the Karachi Se Lahore star weighed in on how there is no such thing as “ethical journalism” anymore, the impact of social media evils and more!

Recently, a Facebook page named ‘Unsatisfied Yasir Hussain’ popped up on our newsfeeds. This led to us approaching Yasir for a telephonic interview in the first place. As the conversation unfolded, he clarified that he does not have a Facebook profile but had heard of this development from his close friend and actor Armeena Rana Khan. Needless to say, Yasir sounded least bothered and in fact lauded the anonymous individual who made the page for coming up with a rather creative name and posting hilarious content. “I came across a few things on the page and I found them to be quite funny because I have a good sense of humour too,” said Yasir, while speaking about his initial reaction to the page.

He also praised Armeena and Ushna Shah for holding their own and expressing their viewpoints without hesitation. “I’m not saying this because they defended me but I’m glad stars like Armeena and Ushna have an opinion about things. Kursi, table, gari or khamba ke toh opinion nahi hotay, opinions toh insaano ke hotay hain! There are some actors who don’t like engaging in controversies and I respect that too. I’m not against them and how they choose to live their life is their choice,” said Yasir. “But those who do have opinions, I like those people better.” 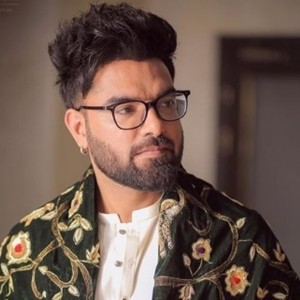 Meanwhile, he expressed disappointment at the state of journalism in today’s world. “Ethical journalism has become a thing of the past. I sit back and enjoy whatever is said about me because it does not make even a minute difference to my life. If social media shuts down one day, it will not affect me at all and never has before either. It feels great to be approached to hear my side of the story though but I could live without it too.”

Vocal and outspoken, Yasir also reflected on the criticism he has received in the recent past from his contemporaries and netizens alike. “I have faith that others will soon also learn how to take jokes and respect each other’s opinions too,” he added, shedding light on the time he shared his thoughts on Esra Bilgiç being the face of a Pakistani mobile phone brand and his words were taken out of context. The

Lahore Se Aagey actor’s statements seemed well-intended as he urged his followers to support Pakistani actors instead. Yasir got flak for not being welcoming to international stars. Responding to the same, he stated, “There are people who have been hating on me but they are very few in number. They have the right to their own opinion as do I. My haters are obviously fans of some other star who may disagree with my opinion. So, it is very natural and happens everywhere in the world. There is nothing wrong with it.”

He added, “Slowly people will realize that it is important to not let foreign content overshadow local content. It is not my mission in life to ban foreign artists from working here (such as Esra Bilgiç) and its not like I am a crazy person who will go to the press club and protest. I said what I felt at the time and people got serious for no reason so I just played along too!” Yasir continued, “But something that is very wrong when people are spiteful of others and hate them from the heart. It does not bother me but the person hating is the one who suffers more at the end of the day because they don’t realise how bitter they are becoming from the inside. That is how I look at it!” He mentioned that he has is living a fulfilling and content life irrespective of what people say or do. “I think it’s really hard for people to ignore me,” laughed Yasir.