Ali Zafar, Mansha Pasha, Others Celebrate Johnny Depp Defamation Win Against Amber Heard
The Virginia jury on Wednesday, finds Ex-Wife Amber Heard defamed the star.
After 6-weeks of trial and making headlines for the same, the Virginia jury unanimously ruled in favour of Johnny Depp who won millions in the defamation case against Amber Heard, on Wednesday. A jury comprising seven people has been deliberating for about 13 hours over three days in Fairfax County Circuit Court near the US capital. The strained relationship between Johnny Depp and ex-wife Amber Heard became a public spectacle when Amber wrote an op-Ed in the Washington Post in 2018 regarding domestic violence and how she has faced the wrath of society in full force.
Following this, 58-year-old Depp sued her for defamation and after 6-weeks of trial in which dozens of witnesses including a friend’s family, doctors, bodyguards, as well as audio evidence were presented. The trial eventually ended on Wednesday and Depp won the defamation suit. Fans all over the world have been elated and overjoyed which also include celebrities and stars. Interestingly, not just fans, Pakistani stars, and celebrities have been elated and shared the good news all on their social media handles. Actor Sana Javed Shows Her Support To Charlie And The Chocolate Factory Star: 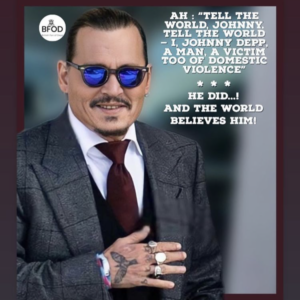 The Khaani star was among the stars who showed their support for Jhonny Depp winning his libel trial against Amber Heard. She posted lots of pictures of the Pirates Of The Caribbean star and shared the news with all her fans via her Insta handle that he has “Won the case”.
Actor Mansha Pasha Thinks Abuse Has No Gender: 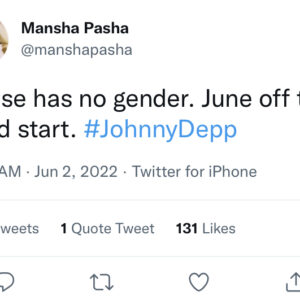 Actor and social media activist Mansha Pasha showed her happiness and elation over Depp’s defamation win and thinks that “abuse has no gender. June of to a good start.” She even shared a meme on her Insta handle and is loving the meme game already.
Ali Zafar Thinks That All Those Years Gone Wasted In proving The Allegations Wrong When He Could Have Produced Great Movies And Films: Singer Ali Zafar shares his views on Johnny Depp’s win and says that nobody can understand how many years he (Depp) wasted in proving himself innocent when he could have produced great films. No verdict can bring him his prime years back.
The Post looks reminiscent of what Ali Zafar went through during the trial with singer Meesha Shafi when she accused him of harassment. The singer lost some major contracts and went through immense media scrutiny.
Jamima Goldsmith thinks that Depp Should Waive Off Amber Heard’s Damages:
Win or not, Jemima Goldsmith, the ex-wife of former prime minister Imran Khan, also took to Twitter with sage advice. In her opinion, Depp should “waive off Amber Heard’s damages” considering that it was never about the money, and urge “trolls to stand down and wish her well.”
Armeena Rana Khan Thinks That She Is Happy But She Didn’t Like The Online Abuse Directed At Amber: Armeena Khan is all happy for the victims of DV (Domestic Violence) everywhere,” she also added that she did not like the “vibe, misogynistic abuse (online)” directed towards Heard during the trial. “I read some truly despicable things,” she wrote.
Kinza Hashmi And Aimen Khan Show Their Support To Johnny Depp:
Actors Kinza Hashmi and Aimen Khan both posted on their Insta handles how they are happy and elated with the jury decision.

Four Pakistani Dramas That Had Promise But Failed

Habs Episode 4: This Feroze Khan and Ushna Shah Starrer Is True To Reality