On Saturday night legendary actor Amitabh Bachchan and his son Abhishek Bachchan were diagnosed positive with Covid 19. While preliminary reports of both Aishwarya Rai Bachchan, Aaradhya Bachchan and Jaya Bachchan were negative, the latest medical reports say that both Aishwarya and Aaradhya have contracted the virus. Amitabh Bachchan was the first to tweet that he was affected by the virus and was admitted to the Nanavati hospital. “I have tested Covid positive… Shifted to Hospital… Hospital informing authorities… family and staff undergone tests, results awaited… All that have been in close proximity to me in the last 10 days are requested to please get themselves tested!” 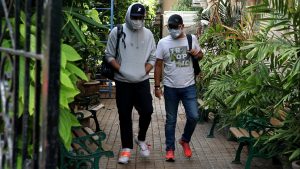 Urging his fans and followers to remain calm Abhishek tweeted, “Earlier today both my father and I tested positive for COVID 19. Both of us having mild symptoms have been admitted to hospital. We have informed all the required authorities and our family and staff are all being tested. I request all to stay calm and not panic. Thank you.”

A health update from a hospital official says that both the actors are stable at the moment. By Sunday afternoon even as the BMC officials went to contain the Bachchan bungalows Jalsa, Pratiksha, Vatsa and Janak, both Aishwarya as well as Aaradhya were diagnosed positive with the virus but stayed in home quarantine.

“Aishwarya and Aaradhya have also tested COVID-19 positive. They will be self quarantining at home. The BMC has been updated of their situation and are doing the needful. The rest of the family including my Mother have tested negative,” updated Abhishek.

Abhishek was recently spotted dubbing on a daily basis for his just released show on Amazon. Abhishek had been dubbing for a good fortnight for the show after which he had been diagnosed with mild symptoms along with his father Amitabh Bachchan. The popular studio Sound N Vision which was hired for the dubbing of the second part of the Amazon web series has also been shut and everyone who worked there including actors like Amit Sadh have also gone in for tests now.

We hope that the Bachchans get well soon.

Brooklyn Beckham is engaged and these pictures are melting our hearts