Bahroze Sabzwari Irks Netizens With his Criticism On Women’s Choice Of Clothing
After the great success of internet sensation mano from “Mera Dil Yeh Pukaray Ajaa”, the internet has gone into a frenzy for a very different reason yet again. This time, it’s veteran actor Behroz Subzwari who recently got quite a flak for his views on women’s choice of clothing. During a Nadir Ali Podcast, the Mandi actor who is never hesitant in sharing his opinions regarding social issues shared his opinion on harassment, drama scripts, and women’s choice of clothing.
According to him” Vulgarity is becoming rampant in Pakistani dramas. Even though I am part of the same dramas, I despise the kind of scripts that has sisters having affairs with their brothers-in-law. Aren’t scriptwriters left with any other topics that can be explored? Watching them with family is absurd and I despise watching such kinds of dramas myself. He further explained why these storylines are being propagated and says “Doing so ensures their dramas rating will skyrocket and why not if one does it offscreen, that will do the trick too”.
Nadir Ali asked Behroze Sabzwari if vulgarity is becoming a norm in the Pakistani drama industry. The Tanhaiyan actor said “it’s the responsibility of female leads to wear clothes that are not revealing. Our society is such that one should not wear revealing clothes. We should pride ourselves in wearing shalwar kameez. Allah will grant you respect even in these clothes. You don’t get popular by copying clothes from foreign countries, you actually get disrespected in society.” 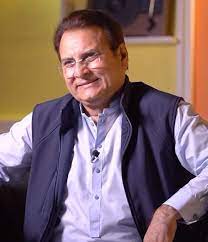 Talking about the harassment faced by women on the roads Bahroze Sabzwari says “I have nothing against women’s freedom and they should have complete freedom to practice their right. It upsets me greatly when women clad in complete veils and fully clothed are subjected to harassment on the roads. Like a radar, men will ogle at the women while driving their bikes Like what are you doing, look ahead!”
Talking about women wearing tight clothes, he said, “In Pakistan a lot of people have motorbikes, obviously, everyone can’t afford cars, there is inflation and people are barely surviving, but, I have noticed one thing that the dressing of women sitting on the bikes is inappropriate, they are not good at all, the clothes are not only see through but usually are very tight, it shows home training, women should be fully covered while sitting on the motorbike. This should be strictly kept in mind. Men should also control their eyes and women should be dressed up in an appropriate manner”.

Kaisi Teri Khudgarzi: The Finale Leaves Us Wondering…What Was the Point?