For Werner Herzog, cinema is a medium that is meant to carry forward man’s ever-renewable conversation with nature. This slender masterly portrait of human relationships is played out mostly in a blossoming park filled with luscious flowers where we are introduced to the shy 13-year old girl Mahiro meeting her father Yuichi for the first time. At first the girl is quiet; don’t strain to hear the background music and props are not a strong point in this sparse stripped-down drama. Then, she begins to open up, sharing her pictures and thoughts with her ‘father’ who, it soon turns out, is not her father but a professional con-artiste hired by her mother to pose as her father. 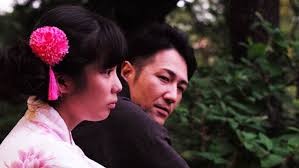 The brief but overwhelming film plays out in a tenor that is the opposite of Indian films about ‘hired families’ such as the Tamil Minsara Kanna where a familial charade is milked for humour. Family Romance LLC is a profoundly tragic story of a society that is so splintered and fractured that it seeks normal family values in play-acting. The wonderful thing about this uniquely conceptualized ‘family drama’ is that the main characters are all played by non-actors. So, what we see are non-actors ‘acting’ the roles of actors.

The simulated relationships and the attempt to create a false narrative of kinship around lonely lives, are underlined by a remote sense of hope and optimism. While heavy weight director Herzog concentrates on constructing the father-daughter relationship through random conversations and pregnant pauses, which are then mercilessly dismantled, there are other professional commitments for Yuichi to fulfill, such as making a woman who once won a lottery experience the same joy again and making a young girl feel important among her social-media friends. This is a film that doesn’t aim to achieve any pointed sense of achievement. But its seeming pointlessness and lack of cinematic consciousness is what makes this Japanese gem so endearing.