Hayat Vax and G42: What You Need To Know

Earlier this week, the United Arab Emirates (UAE) officially announced it will soon be producing the Covid-19 vaccine, Hayat-Vax, in the country. Ever since, several queries have been making the rounds, regarding where the jab will be manufactured and when its production will begin. In light of the same, it has now been revealed that a new factory in Abu Dhabi will start manufacturing the COVID-19 vaccine later this year. Moreover, the plant is being built in the Khalifa Industrial Zone of Abu Dhabi (KIZAD). It will boast of a production capacity of 200 million doses a year with three filling lines and five automated packaging lines, revealed Reuters. 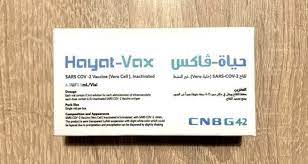 The Emirates latest venture, a partnership between pioneering pharmaceutical Sinopharm CNBG, and leading Abu Dhabi-based technology giant, G42, is destined to make the UAE a global leader in healthcare and innovation.

The vaccine, which will be called Hayat-Vax when manufactured in the UAE, is the same inactivated Sinopharm vaccine from the Beijing Institute of Biological Product (BiBP), that the UAE ran clinical trials for last year and eventually approved for mass usage in December 2020. The vaccine was approved for healthcare workers six months prior, in July 2020. The UAE had carried out the Phase III clinical trials of the Sinopharm vaccine through G42.

As per reports, interim production of Hayat-Vax has already begun in the emirate of Ras al-Khaimah under a deal between G42 and Gulf Pharmaceutical Industries PSC. This interim production line has an initial capacity of two million doses per month. However, no details have been revealed yet, regarding how long production will continue there. G42 has distribution and manufacturing agreements with Sinopharm and is gripped with hopes to provide all UAE regions with the vaccine as soon as possible. “Our joint venture is also actively looking to bring our capabilities to new markets around the world,” G42 CEO Peng Xiao said. The UAE has said its trials showed the vaccine has 86% efficacy, while Sinopharm reports 79.34% efficacy based on interim results. “Thanks to the close collaboration with the UAE, Sinopharm’s vaccine has been now administered to millions of people in the country, the region, and the world,” Sinopharm Chairman Liu Jingzhen noted.