Just when we thought 2020 couldn’t get any more eventful, rapper Kanye West kick started his last-minute presidential campaign with a rally. The rally marks his first from the campaign in which he highlighted issues pertaining to abortion and pornograhy, also argued with some of those who were in attendance of the rally and even succumbed to tears; which of course left everyone in shock.

Kanye West, 43, who has supported Kanye West in the past left voters confused over whether his fight for presidency is genuine or just a publicity stunt that will enable him to sell merchandise or albums. He made his remarks at the event at a wedding venue in Charleston, South Carolina. 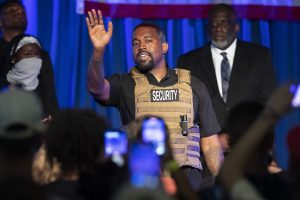 West spoke at the rally for over an hour where he denounced abortion, asked random members of the crowd to speak,  used abusive language and made statements that left everyone rather shocked. “Harriet Tubman never actually freed the slaves. She just had the slaves work for other white people,” he said in a sweeping statement while discussing economic inequality.

The event was aired on local television channels and also live-streamed on YouTube but it still remained unclear whether this was actually West’s genuine attempt to win the presidency. The rapper made an announcement that he would be standing in the November 2020 election on July 4 with a tweet. Since, it has been established however that he has already missed a number of deadlines for him to appear on key state ballots.

He left attendees and voters confused as to whether he actually wanted to win the presidency or whether he was just more focused on getting his message across. “Freedom does not come from an election. The freedom comes from you not loading up the pornography. The freedom comes from you not taking the Percoset,” he said during his ramblings. When he arrived on stage, he had the number “2020” shaved at the back of his head and was clad in a military style vest.

He argued that abortion should be legal but heavily discouraged, while suggesting he would promote a policy as president that anyone who gives birth to a child is given $1 million “or something in that family.” Kanye West also made several religious references and broke down into tears when declaring that his parents had almost aborted him. “The only thing that can free us is by obeying the rules that were given to us for a promised land,” he said. “Abortion should be legal because guess what? The law is not by God anyway, so what is legality?”

The rally appeared to be somewhat mismanaged with a lack of microphones. West was heard repeatedly telling the crowds to be silent in order for those people to be heard who he called upon.

What are your thoughts on Kanye West running for presidency?